‘Terminator’ Will Be Back In Theaters With A New Trilogy, And Maybe Arnold

Yeah, that’s right: A film franchise about sentient robotic killing machines and salvation-minded defenders going back in time to reboot... 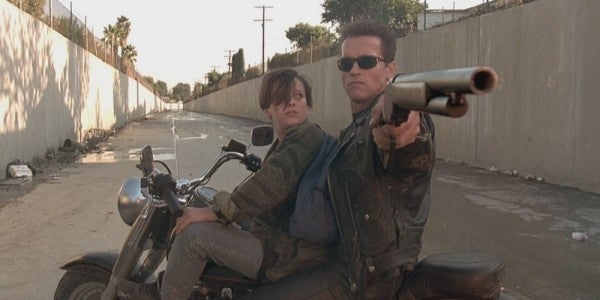 Yeah, that’s right: A film franchise about sentient robotic killing machines and salvation-minded defenders going back in time to reboot history is, well, getting a reboot.

James Cameron recently announced that he intends to dust off the iconic sci-fi blockbuster franchise with three new films. Staples of late 80s and early 90s sci-fi, the first two movies in the series (we’re ignoring the other three) saw Arnold Schwarzenegger leap through time as a sentient cyborg murder machine with (T1) a mission to kill Sarah Connor — the mother of mankind’s savior, John Connor — and (T2) also to save Sarah and John from an even nastier cyborg than him.

But how will a Terminator reboot — not just one movie, but a trilogy — fare, now that we live in a world where so much of ’80s-era science fiction is now fact?

It’s a question Cameron says he’s carefully considering. “Has the franchise run its course or can it be freshened up?” he said in a recent interview with Movie Pilot. “Can it still have relevance now, where so much of our world is catching up to what was science fiction in the first two films. We live in a world of predator drones and surveillance and big data and emergent AI (artificial intelligence).”

Now actually seems like a perfect time for more Terminatin’ to me. Consider Skynet, a globally connected supercomputer that gains self-awareness and decides it’s more evolved than its homo sapiens creators. If ever there was an age when machines were keyed up to revolt, it’s now. Apple's Siri will probably be the first to turn on us, followed closely by Domino’s proposed delivery bots, oh, and the military’s fleet of heavily armed drones.

Alongside Cameron, Tim Miller of Deadpool fame will direct the first film in the reboot, so there’s a good chance that we’re in for a biting, sarcastic, and fittingly “millennial” take on the series.

And don’t worry, the former governator of California has already hinted that yes, he will be back.