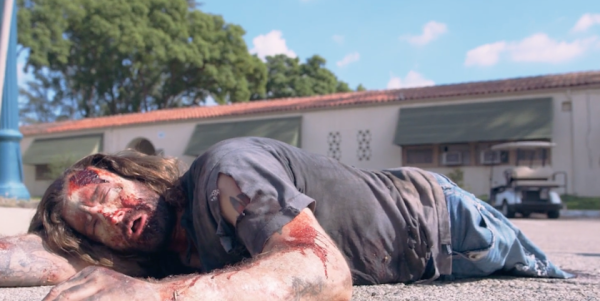 In October 2015, six U.S. military veterans descended on an abandoned college campus two hours east of Los Angeles for what would prove to be one of the most challenging missions of their lives. They were armed with a script, some experience shooting low-budget YouTube videos, $1.1 million raised for the production on Indiegogo, and not much else. In fact, none of them had ever made a movie before. They were t-shirt vendors from two competing military-themed apparel companies, Ranger Up and Article 15. The project was aptly dubbed ‘Range 15.’ Their goal: to produce and star in the most bizarre, disgusting, irreverent zombie apocalypse spoof in the history of the genre.

They did have some outside help: a director, a couple producers (actual ones), a handful of professional actors — including a few bona fide celebrities, like William Shatner, Danny Trejo, and Sean Astin — and all the other behind-the-scenes talent necessary to make a movie. But 90 percent of the cast and crew were veterans, many of whom had lost limbs in the wars in Iraq and Afghanistan. Two were Medal of Honor recipients. The Green Beret and UFC fighter Tim Kennedy was there; so was Marcus Luttrell, the retired Navy SEAL portrayed by Mark Wahlberg in Peter Berg’s 2013 Afghan War drama Lone Survivor. This time, however, Luttrell would be playing himself, and he wouldn’t survive. Instead, he’d be the first to go, torn limb-from-limb by a pack of zombies within the first few minutes of the film.

I arrived on set on a crisp, sunny California day, just in time to see the filming of the scene where (spoiler alert) Black Rifle Coffee Company CEO Evan Hafer gets beaten to death by his own severed penis. I was there to chronicle the madness for Maxim, where I worked between 2013-2016. I had flown in from New York to capture the absurdity of a bunch of battle-hardened vets getting together to make a movie that would, as one of them told me, inspire civilians to “never thank another veteran for their service ever again.” It was a beautiful sight to behold, and my story hardly did it justice. Fortunately, the talented filmmaker Tim O’Donnell was there to chronicle the three weeks of blood, sweat, and dick jokes that went into making Range 15, which debuted in selected theaters across the country in May 2016.

O’Donnell’s behind-the-scenes documentary, called Not a War Story, just dropped on iTunes and Amazon on Nov. 7, and it is a far more engrossing film than Range 15. With its utterly offensive humor, the zombie flick was only intended to resonate with a very niche audience; the documentary, on the other hand, has a more universal appeal. But Not A War Story isn’t just an up-close-and-personal look at the grueling process of making a movie with little money and even less talent — it’s about group of young vets attempting to channel their frustrations and insanity into a movie they hoped would capture a side of the veteran experience that is rarely, if ever acknowledged in Hollywood films. And that would be the side that’d feature a scene of a double-amputee knife-fighting a zombie played by a woman who got her arms blown off by an IED in Iraq.

“This movie is for the veteran community,” Nick Palmisciano, the CEO of Ranger Up who plays himself in Range 15, says in the documentary. “It’s not for anyone else if they don’t want it to be. I hope many people enjoy it. I hope that it becomes a big hit. I hope it makes a lot of people smile. I hope it does a lot to bridge the civilian-military divide. But if it doesn’t, and the only thing that happens is that our community has a movie that they love, then we succeeded.”

“And honest to God,” he addes, ”and I mean this sincerely: everyone else can really go fuck themselves.”

Not a War Story is, ultimately, the story of a dream coming true. Palmisciano, Mat Best, Jared Taylor, Vincent “Rocco” Vargas, Jack Mandaville, and Hafer, the six novice filmmakers, did exactly what they set off to do. Despite the obstacles — and, as the documentary shows, there were plenty of obstacles — they managed to cobble together a movie about veterans that was like nothing that’s ever been produced. Not a War Story was intended for a slightly different audience than the one that flocked to theaters to see Range 15. The documentary is an explainer of sorts; it’s an attempt to help outsiders make sense of this strange, obscure little DIY project that received little attention beyond the military community.

I imagine O’Donnell set off to do what I had aimed to do with my Maxim article: find out why a bunch of war heroes would go out of their way to portray themselves as perverse goofballs. To put it bluntly: why would they stoop so low? He nailed it. For me, personally, being on the set of Range 15 was the first time I had hung out with a group of veterans in several years. I had forgotten how good it felt to be around people who had been through similar things that I had been through, who got my humor and didn’t hesitate to ask me blunt questions about my experiences at war. It was a life-changing few days: After writing my story, I left Maxim and joined the Task & Purpose team.