A new World War I documentary by Academy Award-winning director Peter Jackson (Lord of the Rings) offers a fresh look at how warfare may change, but the mundanities of military life and the brutal realities of ground combat remain the same. 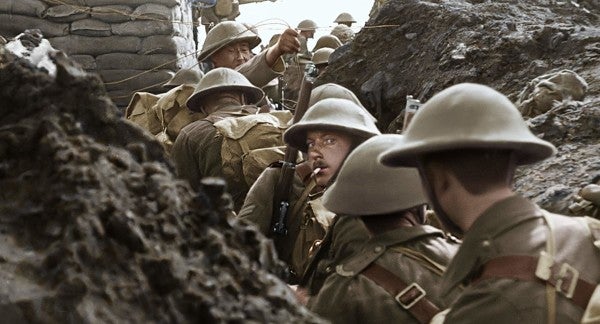 A new World War I documentary by Academy Award-winning director Peter Jackson (Lord of the Rings) offers a fresh look at how warfare may change, but the mundanities of military life and the brutal realities of ground combat remain the same.

Titled They Shall Not Grow Old, the project was four years in the making, and paints a vivid picture of the Great War by putting a premium on emotional authenticity as it follows British soldiers assigned to the Western Front between 1914 and 1918.

The story was cobbled together using more than 600 hours of audio recordings of interviews with veterans of the war, who serve as your narrators throughout the movie. More than 100 hours of black and white silent footage provided to Jackson by the Imperial War Museum was painstakingly remastered and colorized. Forensic lip readers were brought on board to discern what was being said, and then professional voice actors from the appropriate region were hired to dub over the silent film.

The effect is profound: After watching the film during a special Dec. 27 release, for the first time I felt close to the men who lived, fought, and died in the trenches more than 100 years ago. The downrange dangers they faced may have been different than those shouldered by veterans of recent wars, but the way the soldiers coped and suffered alongside one another, how they grappled with disillusionment and a sense of disconnect when they returned home, and how they by turns processed and were changed by the hardships they endured will be immediately recognizable to anyone who served overseas or under fire.

Though the documentary was initially limited to Dec. 17 and Dec. 27 screenings in select locations in the United States, They Shall Not Grow Old will receive a wider release in New York City, Los Angeles, and Washington beginning on Jan. 11, 2018 with plans for additional screenings in February, according to Collider.

The feature-length documentary is broken into three distinct parts: The decision to enlist and go to war; service on the front; and the return home.

The story begins in black and white and immediately introduces a rolling cast of narrators — real World War I veterans who were interviewed in the 1960s and 70s — who explain why they decided to enlist. You've heard the reasons before. You've probably given them: love of country; a desire for adventure; a sense of duty; fear of being branded a coward; or of missing out on the great undertaking of the time, to name a few. It's immediately familiar, as is the montage of footage showing fresh recruits fumbling with rifles and issued gear at the start of training before being transformed into crisp and orderly soldiers by the time they graduate.

As the men reach the Western Front, walking in a column toward the camera, the black and white footage becomes awash in color. Now that they're at war, you see it the way they do, and in many cases this is actually true considering that Jackson took photos of the battle sites and matched the color to the black and white frames in post-production.

Though the visual elements are stunning, it's the storytelling that makes They Shall Not Grow Old stand out. The film is structured in such a way that you feel like you're following a single unit over the course of the war, and without realizing it, you begin to assign voices to the faces on the screen. Nowhere is this more noticeable or poignant than during a major offensive when the soldiers charge out across no man's land under a creeping barrage of artillery fire. As they close on the German lines, enemy machine guns open fire. The screen goes black and we hear our narrators describe the sound, the sight, and the sensation of rounds ripping into bodies — their own and their friends.

The camera jumps to close-ups of the men we saw earlier in the film, then abruptly transitions to dead and mangled bodies.

As one colleague put it, “you feel like you just watched your friend die. You spent the entire movie getting close to these characters, and now they're dying in front of you.”

The battle isn't specified, which may have been a deliberate move on Jackson's part to make the scene universally applicable to all those who fought on the front.

And to be honest, that's the general tone of They Shall Not Grow Old. Sure, it's a World War I story, but at it's heart it's a war story: Theirs and yours.

This is on display in the heavy moments, as well as the light ones. After spending days in the trenches, where dead bodies sink into the fetid mud, the men are given a reprieve and sent to the rear… where they're immediately ordered to clean their uniforms, shave their faces, wash their nasty bodies, and report for a working party.

It turns out that staff NCOs have been ranting and raving about unshaven faces since before any of us were born.

They Shall Not Grow Old closes with the end of the war, and the film reverts to black and white — as if “back home” is muted and dull compared to the vibrancy and violence of the front. And again, the narrators remind us how things change yet remain the same: The job market is scant; family and friends don't really want to hear about what the war was actually like; their service feels unappreciated or discounted, and at worst, entirely ignored.

It's a sentiment that perhaps any grunt, from any conflict, will find eerily familiar.