Tom Hanks Wants Veterans To Audition For His Next War Movie

Ever catch yourself abruptly pulled out of a war movie? The squad’s cut off, outnumbered, outflanked, and ready to make... 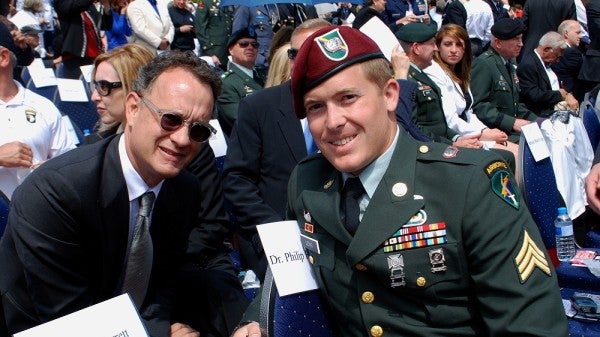 Ever catch yourself abruptly pulled out of a war movie? The squad’s cut off, outnumbered, outflanked, and ready to make their last stand. As the camera pans slowly past all those beautiful and heroic Hollywood faces, you catch a glimpse of some random GI in the background — his unit patch is upside down, finger on the trigger, and he’s leaning on his rifle, with the muzzle in the mud, like an old man’s walking stick.

Heroic moment ruined, all because an extra never got a safety brief (or hazed for poor weapons handling.) Fortunately, as with most problems in life, Tom Hanks has a solution.

Hanks is looking for extras to play Navy crewmen in his upcoming World War II naval flick, Greyhound, specifically those with a military background, We Are The Mighty recently reported. The upcoming film is based on The Good Shepherd, a fiction novel by C.S. Forester, and follows a Navy destroyer during the grueling Battle of the Atlantic — one of the longest campaigns of the war.No stranger to big-budget war films and television shows, Hanks is writing, producing, and starring inThe Good Shepherd.

Related: Tom Hanks: ‘Military Caregivers Are Hidden Heroes And They Need Your Support’ »

Now for those troops looking to play troops, here’s what you need to know if you want to get a little screen time on the bow of a destroyer (and when no one’s looking, act out scenes from the Titanic with your battle buddies. “I’ll never let you go, bro. Psych, get off my door.”)

While military experience is preferred, it’s not required, and the casting agency is looking for men between 18 and 49 to apply. Actors must be willing to be clean shaven, and need to have a 1940s’ Navy crewman-style haircut. But seeing how military-ish fades with long tops are all the rage right now — thanks Macklemore, Peaky Blinders, and Fury — many applicants probably have an appropriate do already.

The deadline to apply is Feb. 18 and shooting takes place between mid-February and early April, in Baton Rouge, Louisiana. Say what you will about pretending to be a 1940s-era sailor, their fictional duty stations are a hell of a lot better than our real ones.

And check this, just like being a real-life service member, playing one on the set of Greyhound also comes with “some pay.”

They’re gonna nail it on realism, guys. Find all the details here »