‘Top Gun: Maverick’ Will Reportedly Be Just Like ‘Stealth’

With production of Top Gun: Maverick moving full steam ahead, we’re finally getting our first glimpse at the actual plot... 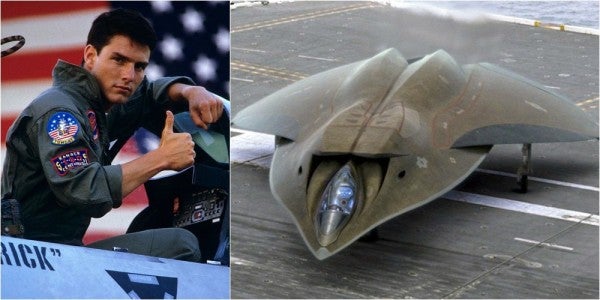 With production of Top Gun: Maverick moving full steam ahead, we’re finally getting our first glimpse at the actual plot of the long-awaited sequel.

Variety reported on Thursday that one-time Korean War Army private Jon Hamm and legendary Marine Corps aviator-cum-astronaut Ed Harris would join the cast joining a production that “will be set in a world of drone technology and will explore the end of the era of dogfighting.”

Drone technology? The end of the era of dogfighting? I’ve seen this movie before, and it’s Stealth the over-the-top 2005 military sci-fi flick and, apparently, a secret favorite among defense contractors.

Top Gun: Maverick will see Tom Cruise reunite with Val Kilmer’s Tom “Iceman” Kazansky and apparently hang with the son of Nick “Goose” Bradshaw, played by a Miles Teller fresh off a tour as a grunt in Thank You For Your Service.

The first day of filming took place at Naval Air Station North Island on May 31, the same day that Cruise posted a photo to Instagram indicated that Pete “Maverick” Mitchell had upgraded from an F-14 Tomcat to an F/A-18E/F Super Hornet strike fighter in the intervening years. We still have no word on whether Maverick spent the 90s flying rubber dog shit out of Hong Kong.

While CNN had initially reported that Paramount “will reimburse the Navy for any costs incurred for flying sequences which do not meet training objectives,” Clarke told Task & Purpose that the production crew was shooting b-roll during normal operations specifically “because it’s going to incur no additional costs or involve any logistics requirements or burdens.”

All of this is to say that this is a far cry from the production of the first film on the USS Ranger, where director Tony Scott cut a check on the spot for the carrier, which was out at sea, to turn and give his team better lighting for the iconic intro shots. If you’re going to see any aircraft go head-to-head with some futuristic unmanned aerial system, it won’t be an actual in-the-flesh Super Hornet.

On the upside, at least it won’t be an F-35 Joint Strike Fighter. Now all this movie needs is some Jessica Biel, Jamie Foxx, and a depressed flying robot that goes violently AWOL and we’re really talking.