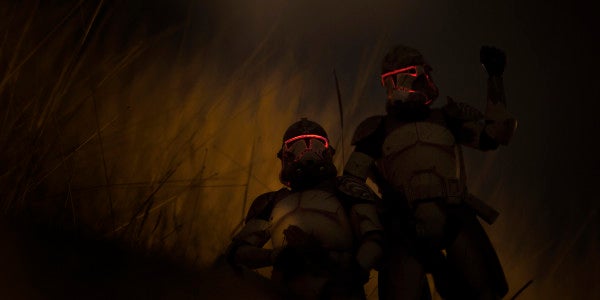 Callahan is well positioned to tell a fictional story of wartime service behind Star Wars characters. His Marine Corps career career began six years ago, when he enlisted as an infantryman. Shortly into his first deployment to Afghanistan with 2nd Battalion, 3rd Marine Regiment, he broke his leg and was sent home to recover at Wounded Warrior Battalion-West’s Hawaii detachment. While there, he learned photography and transitioned from the infantry to become a Marine combat correspondent.

Callahan is currently attending photojournalism training at Syracuse University as part of a Department of Defense program there. Outside of his studies and his work with the Marine Corps, Callahan has started this Star Wars project. Callahan’s work does not just create a life-like and moving scene from a plastic toy, it presents a humanity to the faceless Storm Troopers and other characters that, for decades, have been faceless icons in the American consciousness. With an infantry Marine’s perspective and a talented photographer’s skills, Callahan creates spectacular battle scenes and portraits of the fighters.

He titled his essay “Galactic Warfighters.” In this Instagram post, he poses with one of his action figures.

“I feel being a former infantryman gives me a better perspective and will serve me well in telling the stories of Marines from the ground combat element especially,” Callahan told Business Insider in 2013. “Civilians have a genuine interest in knowing about the ins and outs of Marine life and I have a genuine desire to tell them. It's incredibly satisfying and a wicked good time.”

Here are some of his scenes from “Galactic Warfighter.”

A Clone Commander drags a wounded clone out of a kill zone after being ambushed by separatist forces.

Advanced Reconnaissance Commandos make their way up a mountainside to stand up a listening/observation post for their battalion's forward operating base in the valley below.

Portrait of a Galactic Warfighter: “I think the longest I stayed put was about 10 or 11 days scouting a separatist forward operating base. The brush starts talking to you after a while.”

Advanced Recon and Airborne Commandos fire a Mk 153 shoulder-fired multi-purpose assault weapon during joint weapons system familiarization training. The projectile explosive weapon is used to bust tanks and bunkers for light infantry. The troopers worked together as gunners and assistant gunners to get used to operating in the same environment together for future operations.

Portrait of a Galactic Warfighter: “Our radios never work. They spent all this time training us, making us, and they couldn't issue us good comms.”

Advanced recon commandos stack up on a compound wall and make entry to eliminate a suspected Separatist intelligence cell in Mos Eisley, Tatooine.