A definitive ranking of the best war movie beards

It's not just for operators. 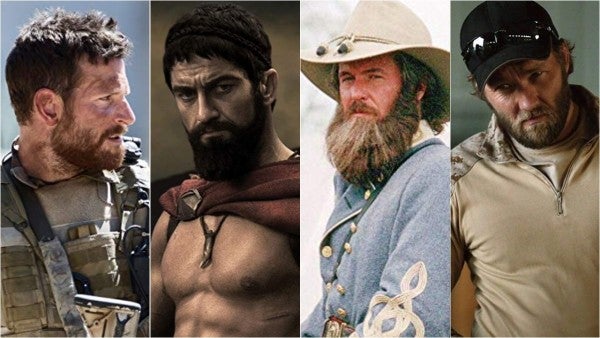 The only thing Hollywood might love more than a good-looking man named Chris — heavy emphasis on might — is a war film. And in recent years, a primary constant in contemporary war films has been facial hair.

The appearance of facial hair in war movies has shifted with the standards; when beards were allowed in the military, they were shown in movies portraying the time, which explains why you don't see a whole lot more than stubble in WWII movies.

Now, facial hair is mostly banned throughout much of the armed services (though some service members have received religious exemptions). But in the post-9/11 era, movies highlighting special operators have become the norm, hence making operator beards the norm. Special operators have had more relaxed standards as they deploy to areas of the world where a man's facial hair can hold a different kind of significance.

The good, the bad, and the ugly have all made an appearance on the silver screen. To help you keep it all straight, here is a definitive, completely unscientific yet totally correct ranking of the best war movie beards.

Any complaints will be forwarded straight to the trash. This ranking is definitive, as the title suggests.

If I saw this beard on the street, I'd think “eh.”

This beard is acceptable. I'm not mad at it — it gets the job done — but compared to its competitors it's not show-stopping. I won't pretend to be unbiased here as I will always see Kitsch as Friday Night Lights' lovable, well-meaning screw-up Tim Riggins, so take that as you will. But this beard is worth a quick highlight.

Hollywood Nirvana — a war film and a Chris.

Pratt's beard ain't pretty, but then again it's not meant to be. It works with the rest of his aesthetic seamlessly, and for that reason it ranks in at #7.

Like John Krasinski a couple spots down, Edgerton's beard just physically looks great. It's that simple. This is the Kraft mac & cheese of operator beards — a classic.

What I like about Cooper's beard is its haphazardness. It's not quite as full as Krasinski's and Edgerton's, but it very effectively says “Do not, under any circumstances, fuck with me.” He doesn't have time to groom — he's busy, get off his back.

It pained me not to rank my man John Krasinski as number one, as I believe he is the best we as a country have to offer. That aside, this is a solid, full beard — not King Leonidas-status, but more than respectable.

John, if you're reading this, forgive me.

Look at this guy. That beard is coming in at #3 and I won't hear a word about it.

Were it not for the aforementioned lads, Gerard Butler as King Leonidas would have taken the cake.

Leonidas and this beard are one — try for a moment to imagine the iconic “this is Sparta” scene without that beard. Exactly, you can't, because kicking a Persian messenger who has really pissed you the fuck off down a well can't be done with some half-assed attempt at facial hair.

Others may try to compete, but they will fail miserably when confronted by Martin Sheen (top left), Tom Berenger (right), and Patrick Gorman (bottom left). I could have ranked them all individually, but it seemed more than appropriate to tie them all for first place.

I mean, give me a break. There's no way this unbelievable mustache wasn't getting mentioned.

By popular demand, Viper is also receiving an honorable mention, because what an icon.