There’s a video floating around the internet that’s just too badass not to share. It depicts soldiers at an outpost... 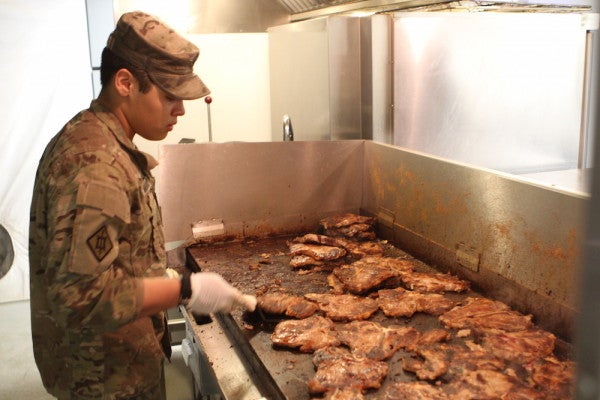 There’s a video floating around the internet that’s just too badass not to share. It depicts soldiers at an outpost in Afghanistan under fire and mobilizing to return fire against Taliban forces. Nothing unusual there, but behind the Hesco barriers, just out of sight of the gunfight, a couple of soldiers keep manning the grill, cooking up some steaks.

The video was first uploaded to YouTube in May 2009, and the description describes the outpost as OP Vegas, which was a part of U.S. infrastructure in the Korengal Valley in Kunar province, Afghanistan.

The scene is reminiscent of a meme we here at Task & Purpose love about the Islamic State.

That’s the sentiment that has made this video of Afghanistan popular. Donned in full battle rattle with flak and kevlar, the soldiers manning the grill seem hardly concerned with the battle raging around them. Behind them, soldiers fire mortars into the mountainside.

“The steaks, are fine, that’s all that matters,” a soldier is heard saying between bursts of gunfire.