Want To Watch Brad Pitt Play A Certain General In This New Trailer? Sure You Do

It’s Wednesday, so it must be time for Brad Pitt to play Army again. But this flick is different: He’s... 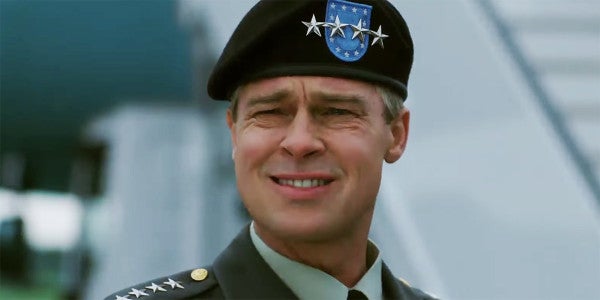 It’s Wednesday, so it must be time for Brad Pitt to play Army again. But this flick is different: He’s not killing Nazis anymore!

Netflix today released a trailer for its Pitt-powered, upcoming feature-length film, “War Machine.” Described as a “politically charged military satire,” the movie is a comedic adaptation of late reporter Michael Hastings’ book, “The Operators: The Wild and Terrifying Inside Story of America's War in Afghanistan”:

Huh. Let’s chew on that for a second.

Anyway, check the trailer out above; it looks well-executed, and dark comedy is probably the right approach to Hastings’ reporting, which was as freewheeling, shit-breaking, and occasionally off-message as the ornery green-suiters he skewered.

Pitt, a noted civilian, has probably spent more time in uniform than I did, in films about killing Nazi soldiers, blowing up Nazi tanks, hunting Nazi spies, and now, antagonizing the Taliban and Joe Biden. At this point, the actor could probably fare pretty well in a post-board screen for battalion command.

Then again, as another Pitt persona once put it, “Sticking feathers up your butt does not make you a chicken.”