Here Are 6 Great Scholarships For Survivors Of The Fallen

Paying for college isn’t easy. Having to worry about how to afford to tuition when you’ve lost a parent to... 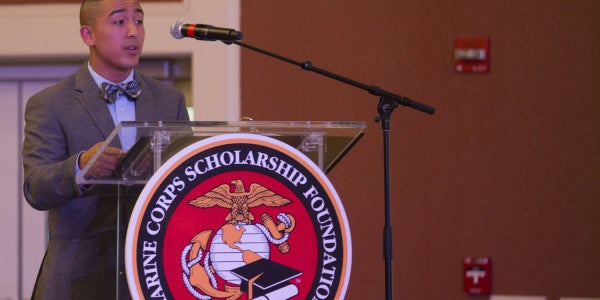 Paying for college isn’t easy. Having to worry about how to afford to tuition when you’ve lost a parent to combat isn’t something anyone should have to do. That’s why a number of foundations have made it their mission to honor the fallen by helping their children pay for their education.

In order to determine the best scholarships for survivors, we reached out to the Tragedy Assistance Program for Survivors, a gold-star family advocacy group, which has program coordinators that work to prevent and eliminate college debt for children whose parents were lost to military service.

“There are some organizations that just provide money to surviving families, these organizations go way above and beyond to make sure the families are supported as well as funded,” according to Ashlynne Haycock, an education support services coordinator with TAPS. “These organizations help make the dreams of a college education a reality.”

Founded by Army Veteran David Kim, the nonprofit Children of Fallen Patriots helps thousands of struggling families with education funding. The group gives college scholarships to children whose parents were killed in the line of duty. The money is very flexible and can go toward tuition, rent, books, and any other necessary supplies. Those seeking to apply simply have to fill out an enrollment form, and each student who applies is eligible for up to $6,250 every year.

Folds of Honor was founded in 2007 by Air Force Maj. Dan Rooney. Since then, the nonprofit has raised $70 million and given more than 10,000 educational scholarships to the family members of soldiers killed or disabled in combat. Folds of Honor offers a series of generous scholarships ranging from higher education to future use, which helps younger children pay for post-secondary education. Award amount is needs-based with a maximum award amount of $5,000 per academic year.

Related: How Military Children Can Find And Earn College Scholarships »

Fisher House is known for providing a number of different charitable activities including housing and caring for sick veterans. But the organization also offers a scholarship called the Heroes’ Legacy Scholarship to the children of post-9/11 service members who have died or have become disabled. For 2016, the amount given to each student awarded the scholarship was $5,000. Applicants must be enrolled or expected to enroll in a full-time undergraduate degree program with an accredited college or university.

The Freedom Alliance Scholarship Fund was established by Marine Corps veterans Lt. Col. Oliver North and late Lt. Gen. Edward Bronars. Since its foundation, Freedom Alliance Scholarship Fund has awarded more than $7 million in college scholarships. Though the amount varies per year, for 2016, 168 scholarships were awarded. All interested applicants must either be in their senior year of high school, a high school graduate, or a currently enrolled full-time undergraduate student.

One of the older scholarship providers, the Marine Corps Scholarship Foundation has been around since 1962. Since then, it has given more than 35,000 scholarships totally nearly $100 million. It has a survivors program called the Heroes Tribute Scholarship Program for Children of the Fallen, which provides higher education scholarship support ranging from $6,000 to $40,000 over four years to children of fallen, disabled, or ill Marines and Navy corpsmen.

Established in 2004, the Pat Tillman Foundation is named for the NFL all star who lost his life in Afghanistan. Since 2008, the Tillman Scholars program has supported more than 400 veterans and military spouses with tuition, books, and living expenses. Each award amount is determined on a need basis. The exact amount is based on the recipient's individual financial need and the strength of his/her application in the overall pool. The average award amount last year per student was $6,567 annually.