A Post-9/11 Widow Honors Katherine McFarland, Who Lost Her Husband And His Brothers In WWII

On Jan. 1, America lost one of her most precious and sacred treasures. Katherine McFarland, 93, the widow of Albert... 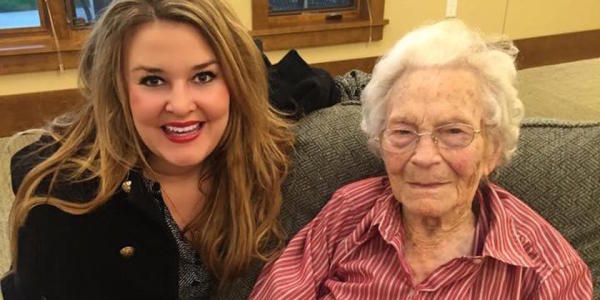 On Jan. 1, America lost one of her most precious and sacred treasures. Katherine McFarland, 93, the widow of Albert Sullivan, youngest of the five Sullivan brothers and the only one who married, died New Year's Day. Katherine was only 19 years old with a 1-year-old son when two uniformed military personnel came to her home in Waterloo, Iowa, to tell her that not only had her husband, Al, been killed when a Japanese torpedo hit and sunk the USS Juneau (CL-52) that he was on, but his four brothers were killed as well. The Sullivan family lost five out of their six children — all of their boys.

On Nov. 13, 1942, a Japanese torpedo hit and sunk the USS Juneau after the Naval Battle of Guadalcanal, killing 687 men including George Sullivan, Francis Sullivan, Joseph Sullivan, Madison Sullivan, and Albert “Al” Sullivan, the youngest of the brothers. The five brothers went together to the naval recruiting station in Waterloo on Jan. 3, 1942, to join in honor of their friend, Bill Ball, who was on the battleship, USS Arizona, and killed in the attacks on Pearl Harbor.

In November, rumors started spreading throughout the small Iowa town that the boys had been killed, which prompted their mother, Alleta Sullivan, to write this profoundly heart-wrenching letter to the Bureau of Naval Personnel. She promptly received a response from President Franklin Roosevelt, but she had already received the knock at her door. The same day the Sullivan family received the knock, the father of the five boys, Thomas, went back to work on the railroad. He knew he was responsible for getting the troops what they needed during the war and he didn't want to let them down.

A little over a month ago, I landed in Cedar Falls, Iowa, after taking the early flight out of Washington, D.C. I hadn’t slept much, but that didn’t matter to me as I was full of excitement to see my good friend, Kelly. Kelly Sullivan is one of two surviving grandchildren of the five Sullivan brothers. Her father was the only child of all five brothers.

I pulled into Kelly’s driveway after spotting the Navy flag flying off of her garage from the road and was greeted with the brightest smile. As I walked into the living room, I was immediately drawn to several framed letters on the wall that were handwritten from “Red” Sullivan to his sweetheart back home. As I read the letters, I couldn’t help but feel overcome with emotion.

Kelly told me what she had planned for the day and mentioned something about her grandmother. Being overtired and a little confused, it didn’t click right away. Her grandmother — the only Gold Star wife of the five Sullivan brothers — was still alive. I had no idea she was still with us, and as I put the pieces together the tears rolled down my face and I struggled to speak as I choked back the emotion, “I would be honored to meet your grandmother.”

Kelly led me down stairs and proceeded to show me more historical artifacts and family memorabilia. As we reached the last stair my eyes caught a glimpse of a familiar object, a Gold Star flag. This was no ordinary Gold Star flag like the ones I have become acquainted with that lay in many fellow widows’ windows. This one was different because it had five stars. Five stars. Knowing the cost associated with my own Gold Star flag with a lone star etched with my husband’s name on it, seeing their flag with five stars hit me hard. I stood there and just stared at it, trying to keep my composure as Kelly moved around the room telling me more stories. Time stood still as I was engulfed in the imagination and emotion of having a flag with five stars that represents five lives lost in war. How can one grasp the loss of five from one family in service to our nation?

“She doesn’t talk about it,” Kelly told me as we pulled up to the beautiful assisted living home where Katherine McFarland lived. “Al wasn’t going to go to the recruiting station with his brothers, but she told him he needed to be with them. She knew he'd regret it if he didn't.”

There have been few times in my life where I have had more anticipation or nervousness. I wanted to be as cautious and respectful as I could, but I also wanted to ask her about her story. Katherine had slight dementia, but when Kelly told her that I was a fellow Gold Star wife whose husband was killed in Afghanistan recently, she understood. I asked her how old she was when her husband died, how they met, and how long they had been married. They both met when they worked at the Rath Packing Company, Waterloo's major employer of the time. They had been married just two years before he was killed when he was just 20 and she 19.

“Awful, just awful. It was terrible” Katherine said, with pain in her voice and a cringe in her face as if it were just fresh when I asked her what it was like to get that horrible knock at the door. She said she was living with her in-laws at the time and the military sent two uniformed servicemen to their door, which wasn’t the norm in World War II. As Kelly left to go get water for her grandmother, I turned to Katherine as tears welled up in my eyes and promised her I would never forget her story nor the sacrifice of her husband and his brothers as long as I lived. I promised her I would carry their legacies along with my own husband’s, and do all I can to live a life worthy of what they gave for me. Although there was an age gap of more than 60 years between us, we had a connection deeper than most people will ever experience.

Katherine and I talked more about her life and her story, and I held onto her every word, as if I may be the last one to ask her about her historic and painful story. I was in awe of her and the full life she had lived after such tragedy. At the end of our time together, she looked at me and said with deep compassion and empathy in her voice, “Honey, how are you doing now? Are you alright?” I struggled to hold in the tears. She just knew.

Little did I know a little over a month later, Katherine would be gone. I was the last person to ever ask her about her story or bring her back to those days over 70 years ago. Last week, I received a notification on Facebook that Kelly had shared one of my photos of her grandmother, with the caption, “I lost one of my best friends this morning….she waited to ring in the new year and then passed away peacefully at age 93.”

I called Kelly that night after composing myself to see how she was doing and to give my condolences. Kelly said they were having a special event for her at the VFW. She also mentioned there isn’t much family to celebrate her. Not only did the Sullivan’s sacrifice five of their boys to our country, but many don’t think about the implications that has on the Sullivan family today. The sacrifice is deep, vast, and beyond what any of us can imagine.

I am deeply humbled by my opportunity to meet Katherine. Our meeting is profoundly ingrained in my soul and has forever changed me. With my own loss, I understand a small portion of what the Sullivans have given, and I also know the importance of never forgetting. It is now up to us to remember the story of the five Sullivan brothers, and remember what they as a family gave for us all. But most of all, the best way we can honor them all is to live lives worthy of what they gave.