Before Surprising Your Kids With An Unexpected Homecoming, Ask Yourself These Questions 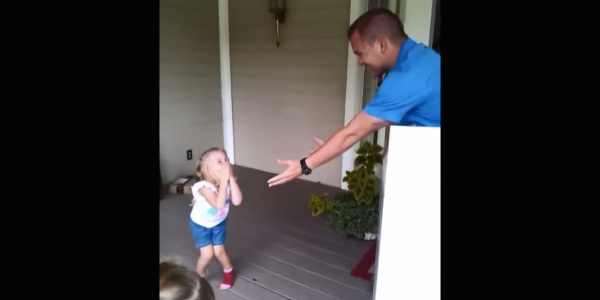 Surprise military homecomings have become such a phenomena in recent years that there’s even a website called “Welcome Home Blog” dedicated to it. The videos can coax tears from the most stolid; Chuck Norris might even cry if he watched a few. But before you hire a hidden camera crew to film your reunion with your kids (or your spouse reuniting with the kids), it might be worth considering many mental health experts are concerned that this might be confusing — and even potentially harmful — to those most vulnerable after a deployment.

Mental health experts weighed in as early as 2011, pointing out that children are already caught in conflicting emotions at a reunion ceremony, and television cameras and an audience of strangers probably heighten the effect. A 2010 study demonstrated that children are already negatively affected by deployments, with preschoolers of a deployed parent exhibiting “higher levels of both internalizing and externalizing behaviors,” school-aged children having more academic difficulties, and adolescents exhibiting more anger and defiance issues. The same study indicates that behavior doesn’t just return to normal after a deployment; in fact, a higher percentage of children had clinically significant anxiety symptoms post-deployment as opposed to during the deployment. Gender also plays a role, with girls displaying more symptoms of heightened stress during the deployment, while boys exhibit more symptoms post-deployment.

So, if you or someone you love is about to return from a deployment and there’s a suggestion about making one of those tear-jerking videos in the hopes of making it viral, please ask yourself these questions first.

How old is your child and how have they handled the deployment?

Look, I totally get the urge to make something and have it go viral. But when you have a child, whatever you want pretty much goes out the window, often sacrificed in the name of making a better life for the small being who will now keep you up all night, drain your bank account, refuse to eat whatever you make for it, and somehow still manage to be charming. If your child has already struggled through the separation, odds are good that an emotional, public reunion videotaped for posterity is not a good idea. If your child is at all introverted or embarrassed by being the center of attention, then please, let the call from Lifetime go to voicemail. If your child is too little to understand where you’ve been or why, it’s probably a safe bet that this surprise reunion would also be confusing.

Who is this video for?

Check your motivation here. Is this video really for your child, so one day they can look back and remember, is it for you, or is it for a wider viewing audience? Are you trying to draw attention to the struggle military members go through for a largely apathetic civilian audience? While the idea of bringing American attention to our service members is tempting, the plethora of these videos along with the lack of change in military policy indicates that most Americans aren’t prompted to do anything other than keep scrolling on their Facebook feeds. If you have an agenda beyond the priorities of you or your kid(s), this might be a good indicator that you’re doing a reunion video for all the wrong reasons.

How will this affect you and your kids long-term?

Kids are great at sniffing out ulterior motives. If you’re doing a reunion video just to get your name in the news rather than just to celebrate a homecoming, your kids are going to figure it out and they might not be thrilled about it. They also might not want to be known as that kid who cried on the news. Redeployments are fraught with high emotions; when those emotions cool and the video is all that’s left, how will they view you? Don’t parlay a reunion with your kids into temporary internet fame.

Our kids only have one shot at childhood. Military children often face additional challenges in the form of repeated deployments, with the long-term effects still unknown. Please don’t add to their stress at an already confusing, frightening time if you’re not 100% sure they can handle it.