Editor’s Note: This article by Rebekah Sanderlinoriginally appeared on Military.com, the premier source of information for the military and veteran … Continued 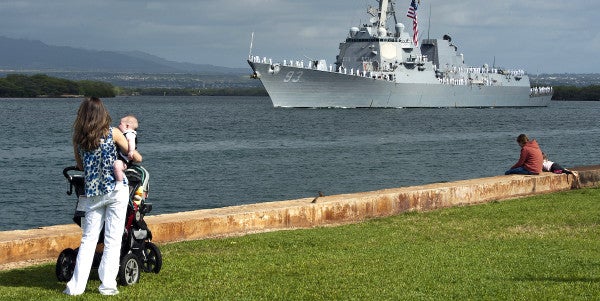 Editor’s Note: This article by Rebekah Sanderlinoriginally appeared on Military.com, the premier source of information for the military and veteran community.

I've done some brave things in my life. I'm not saying that to prop myself up, but to say that I know what it feels like to swallow my fear and step forward anyway.

I moved across the country and gave up a dream job in order to pursue a relationship. I went skydiving. I trained to be a professional boxer and stepped into countless rings knowing that I would get hurt. I've given birth three times, twice without pain medication. I've clicked “submit” on hundreds of stories, fully aware that the responses were far more likely to be “no” than “yes,” and that readers might hate me for the words I wrote.

I've driven away from a summer camp where neither of us knew anyone and left my firstborn there to fend for himself — and that's a whole lot harder to do than it sounds.

But each of those actions required a decision. Each time, there was a moment when I could have said no, could have chosen the easier path, could have spared myself some pain.

The bravest thing I've ever done, however, was to become a Must-Have Parent — and I can't point to a “yes” or “no” moment when I made that choice. It just sort of crept up on me, the result of a hundred other choices that seemed much less consequential. This decision was the product of reacting, time and again, in a way that would best address each particular situation. It didn't feel brave at the time.

I say Must-Have Parenting is the bravest thing I've done because the smart thing, the safe thing, the society-approved thing to do would have been to take control and look out for myself. Being a Must-Have Parent has meant putting all my faith into others.

As MHPs, we're leaning out in a lean-in world. We're stepping back when the world tells us to push forward. We're throwbacks. Retro. Old school.

Most of us have no 401(k). We might not even be contributing to Social Security. For many of us, Must-Have Parenting has meant having no professional life at all. For others, it means constantly disappointing our bosses because we are the person upon whom all domestic responsibilities fall.

I'm at an age where most of the couples I started on this military journey with are now divorced. I can't pretend that I don't notice that. I've watched as friends who made the same choices I've made found themselves starting all over again, sometimes with a 20-year absence from the work force, fighting in divorce courts to quantify their own contributions to their families.

And I've watched as far too many of the couples my husband and I started on this path with have had their relationships severed by death. Women who were MHPs with me now find themselves as truly single parents, widows who are grieving, comforting, parenting and providing for their families.

That's why I say that Must-Have Parenting has been a brave choice, even if it's hard to point to an exact moment of decision. It's a path that offers us very little security.

Our culture rarely celebrates parents. Sure, we offer blanket statements about the contributions of parents, but we don't celebrate in-the-trenches parenting.

Military culture, particularly online, can be openly hostile and dismissive toward the work of MHPs, with phrases like, “You didn't serve, you only served dinner,” popping up far more often than they should.

I won't pretend these statements don't make me angry. They make me furious. What could be more “service” than volunteering for a 24/7 job that offers no pay, no advancement, no recognition, no benefits and no security? Moreover, for many if not all of us, volunteering to be MHPs has meant forgoing jobs that would have rewarded us with all of those things.

So why would we do this?

When I jumped out of that airplane, it was to prove to myself that I could. When I stepped into those boxing rings, it was to see how my training and abilities matched up against another person's. When I submitted all those articles, it was to satisfy personal ambition. When I gave birth to my children, it was because I needed more humans to soak all the love my family had to give.

But why did I choose to be a Must-Have Parent?

Love for my husband. I wanted to help him reach his goals, and I was willing to cover down at home so he could.

Love for my children. They needed a parent, and I wanted to do that job.

Love for my country. I knew that my husband had a skillset that was vital for our country and way of life.

The complicated answer: I'm still sorting that one out. It's a million different things on a hundred different days. Love, certainly, but also loyalty. Commitment. Habit. Stubbornness. Pride. Stability. Because it's what makes the most sense for my family right now.

And bravery. Because it feels good to be brave.