In the days before he left Fort Bragg, 1st Lt. Darrell Owens sat down with his sons, Aiden and Eli, … Continued 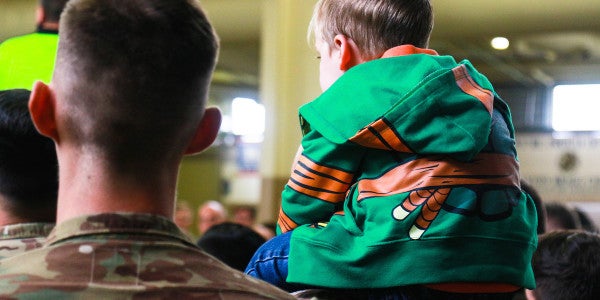 In the days before he left Fort Bragg, 1st Lt. Darrell Owens sat down with his sons, Aiden and Eli, and showed them where Kosovo was on a map of the world.

For most of the next nine months, Owens and about 250 other soldiers with the 1st Brigade Combat Team, 82nd Airborne Division will serve as part of the NATO peacekeeping mission in Kosovo, a small, landlocked country on the Balkan Peninsula in southeastern Europe. They'll be gone for about nine months, officials said.

On Tuesday, the looming deployment was of secondary importance to the roughly 200 soldiers – most of whom belonged to the 3rd Battalion, 319th Airborne Field Artillery Regiment – gathered at Fort Bragg’s Green Ramp, where a plane would soon carry them to Germany for a few final weeks of training before the troops arrive in Kosovo for their mission.

Instead of the mission ahead, Owens and others focused on the fleeting time they had left with their families.

On the stiff wooden benches typically used by paratroopers preparing for airborne operations, loved ones embraced, shared meals and said their goodbyes.

Owens, the battalion’s physician assistant, stood at the far end of the cavernous room, throwing a football back and forth with his sons.

While this is not the first deployment for Owens, it is his first as a father. And that put a new wrinkle in his family’s preparations.

For several months, Owens and his wife, Alisha, have explained the deployment to 10-year-old Aiden and 7-year-old Eli.

“We’ll be keeping peace in a different part of the world,” he explained.

At the same time, the family concentrated on enjoying the time they had left together and made grand plans for the end of the deployment.

Showing the boys the location of Kosovo was one of the final steps.

Aiden said he feels better now that he knows where his father is going, but is still sad to see him leave.

Lt. Col. Kevin Taylor, the commander of the battalion known as the Gun Devils, said the soldiers will spend several weeks at the Joint Multinational Readiness Center in Hohenfels, Germany, to hone the skills they’ll need for the peacekeeping mission.

The paratroopers will be part of a larger NATO force of about 4,500 troops hailing from about 30 different countries. Their mission will be to help maintain a safe and secure environment and freedom of movement for all people and communities in Kosovo, which declared independence from Serbia in 2008.

Training for the mission has involved classes on riot control, the use of non-lethal weapons, cultural classes and techniques for working with civil authorities. Some of the skillsets not typically required of paratroopers will include “fire phobia training” – where Molotov cocktails will be thrown at soldiers so that they can learn how to handle the threats that a riot may pose.

In Germany, they’ll put all their skills together in a test alongside other forces that will deploy as part of Multinational Battle Group-East, located at Camp Bondsteel near Urosevac, Kosovo. The battle group will be led by the 39th Infantry Brigade Combat Team from the Arkansas National Guard.

Taylor said the mission will be unique and not something the battalion typically trains for.

“We’re not going to be firing howitzers,” he said. “We’re doing something different.”

But there is value in working alongside international troops, Taylor said. And the soldiers are more than happy to contribute to safety and security no matter where it is in the world.

“The battalion and everybody is really excited to do this,” he said. “Everybody’s trained hard. We’re ready to go.”

The Gun Devils – who deployed with a D Company, 2nd Battalion, 504th Parachute Infantry Regiment – are the first group from the 1st Brigade Combat Team set to leave Fort Bragg this month.

Eventually, approximately 1,900 paratroopers from the brigade will be deployed, mostly to Afghanistan.

About 300 soldiers from the brigade are already in that country. The brigade headquarters and other elements from the Devil Brigade are expected to join them in the coming weeks.

Col. Tobin A. Magsig, the commander of the 1st Brigade Combat Team, will be among those heading to Afghanistan. On Tuesday, he was at Green Ramp to see off the Gun Devils.

“We are one big family,” Magsig said. “Today we’re losing a bit of the family.”

The colonel said the peacekeeping mission comes with unique challenges the battalion faced in training, at the same time much of the rest of the brigade prepared for Afghanistan.

“I’m just incredibly proud of the Gun Devil team,” Magsig said. “And it doesn’t matter if its Kosovo or Afghanistan, we’re ready.”

NATO has had troops in the country since 1999, and in that time, the security situation in Kosovo has greatly improved. That has allowed NATO forces to focus more on building Kosovo’s security forces and working with other civil agencies.

The soldiers hope not to have to respond to any crises in the country, but Fletcher said they would be ready if called upon.

“We are prepared,” he said. “The soldiers are absolutely ready. They are fired up and motivated.”

Back home, he said efforts have been made to keep families informed during the deployment. Soldiers will be able to talk to their loved ones daily, if they so choose, Fletcher said.

For Maj. Brad Jordan, that means his family tradition of songs before bed won’t end – even if the family is separated by a six-hour time difference.

Jordan, the Gun Devil’s battalion operations officer, said he will be in regular contact with his wife, Amanda, and children, 7-year-old Ava and 9-year-old Bear.

At Green Ramp, he showed tokens that he and his children will carry with them throughout the deployment – a dog-tag split in half for him and Bear and two small hearts for him and Ava.

The two children said they were proud of their father, even though they are sad to see him leave.

The soldiers had originally been set to leave Fort Bragg on Sunday – Father’s Day. But families were granted a few more days reprieve that allowed them to celebrate the holiday before departing.

“It was extra special,” said Owens, who used the additional time to take his sons, Aiden and Eli, out for lunch.

On Father’s Day, the boys drew pictures and wrote notes to decorate Owens’ room in Kosovo.

While their father is deployed, they’ll also keep a journal and write weekly letters, their mother said.

Owens’ first deployment came in 2003, when he was still a newlywed. More than 15 years later, he and his wife, Alisha, said their focus is on the children and their ability to cope with the distance.

“This day is sad but at least the day that I come home is closer than ever before,” Owens said.