The families of two highway workers killed by a drunk driver in 2014 are outraged that the man convicted in... 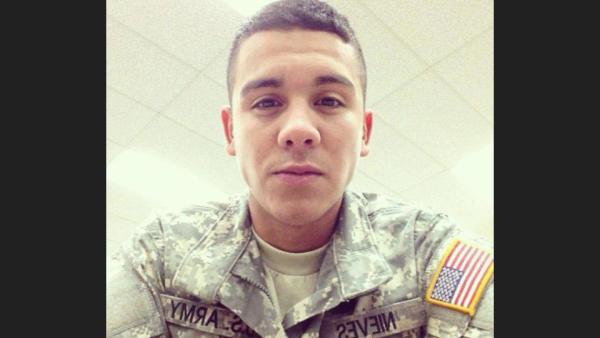 The families of two highway workers killed by a drunk driver in 2014 are outraged that the man convicted in the deaths recently created a GoFundMe account to help pay the court-ordered restitution.

Jan Michael Nieves Delgado, 22, on the crowd funding account pleaded for donations toward the $10,000 in restitution he was ordered to pay to the victims’ families.

“Back in 2014 I made a big mistake while being enlisted in the Army, ended up being kicked out unfairly and even tho I got probation since I was involved in an accident, now I have to pay $10,000 in restitution to fix all damages,” Nieves wrote on the account created in June.

It continues, “It’s been really hard to pay that much back when you have probation and it becomes so hard to find a job and then when you find a job you don’t make enough. Please help me pay back and get some weight off my shoulders.”

Nieves could not be reached for comment on Tuesday.

Nieves, a former soldier stationed at Fort Bliss, was sentenced by a jury to a 10-year suspended prison term after he was convicted on two counts of manslaughter on May 27, 2016, in connection with the deaths of Jimmy Joe Broadstreet, 54, and James Green, 39, in 2014. The suspended sentences meant Nieves was to be on probation for 10 years.

Nieves was also ordered to pay $5,000 to each of the victims’ families, according to court officials.

Broadstreet's stepdaughters, Jessica Hammett and Jaque Desso, said they believe Nieves is trying to make himself the victim.

“I was speechless at first and really appalled by the nerve he had to ask for money,” Hammett said.

Desso added, “Appalled. It baffled me that he is upset that he got fired from the military … How he thinks it's unfair, just baffles me.”

The account was deleted Tuesday after several of the victims' family members and friends discovered the account and posted dozens of comments on the page. The comments stated that Nieves pleading for help is an affront to them because they struggle with the loss of their loved ones every day.

It's unclear if the account was deleted by Nieves or GoFundMe officials. Nieves deleted his Facebook page on Tuesday.

According to Desso, the GoFundMe account hadn't raised any money before it was deleted this week.

District Attorney officials said they reported Nieves’ actions to his probation officer and to 168th District Court Judge Marcos Lizarraga, who presided over the trial.

District Attorney Jaime Esparza said in a statement the GoFundMe account shows that Nieves is not sorry for his actions and has no empathy for the victims’ families.

“The GoFundMe account is highly offensive,” Esparza said in the statement. “It is a clear indication that he shows no remorse that his actions took 2 lives.”

Hammett said that she is not sure if reporting the account will have any impact on Nieves’ probation status, but hopes it will help discourage anyone from helping Nieves pay the restitution.

“I don’t know if anything will come from this,” Hammett said. “I don’t know if they are going to reprimand him or if this is in violation of his probation, but really I just want for this to be seen by as many people as possible so that nobody will donate to him.”

“He made the mistake,” Hammett continued. “He got behind the wheel drunk and killed these two great men. I feel like him asking people to donate is him trying to make it seem like he is the victim. He is in no way the victim.”

Desso and Hammett said their mother, Monica Broadstreet, has received a few restitution payments in small amounts from Nieves. They weren't sure how much he's paid so far, they said.

Nieves had a blood alcohol level of 0.118, which is higher than the legal limit of .08, when he drove through several traffic barriers onto Interstate 10 East near Schuster Avenue on May 11, 2014.

He struck the two men, who were part of a construction crew working on building a bridge over I-10 connecting Schuster Avenue and Paisano Drive as part of the Spur 1966 project.