What Happens When A Blue Star Turns Gold

April 12, 2002, began like any other Friday for 10-year-old Ashlynne Haycock. She woke up, ate breakfast, went to school, … Continued 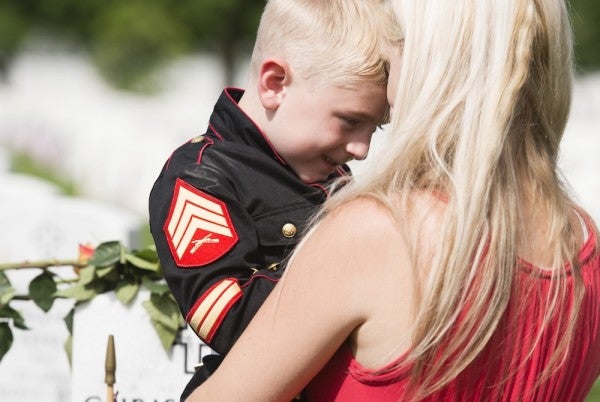 April 12, 2002, began like any other Friday for 10-year-old Ashlynne Haycock. She woke up, ate breakfast, went to school, and got an A on a spelling test.

“My dad was always the person who helped me study for tests,” she told Task & Purpose.

She was ecstatic to show her father, Army Sgt. 1st Class Jeffrey Haycock, the result of her hard work. But that would have to wait a week. The day before, he had flown to California for a pre-deployment exercise at the Fort Irwin National Training Center, and was expected to return home to their house in Fort Sill when his training was complete.

However, he suffered a heart attack while training and died suddenly. He was only 38.

That Friday, unknown to the Haycocks, would be anything but normal. That was the day Ashlynne, her mother Nichole, and her brothers Colten and Weston, learned what happens when a blue star turns gold.

“I walked home from school, and it was like something out of every military movie you’ve ever seen,” she said.

Ashlynne, though still a young child, was the first to learn of her father’s death while her mother, an Air Force veteran, was still at work.

“All the neighbors were standing outside waiting for the children to come home from school,” she said. “Everyone realized what was happening at once, but no one could stop them before I had seen the two men standing at the door.”

Those men, who were tasked with giving the death notification, wouldn’t divulge anything to Ashlynne without her mother present. So she stayed at a neighbor’s house for three hours until Nichole could be located. Ashlynne, however, admitted she knew what was happening before her mother had the chance to tell her.

“I walked in that front door after she got the notification and I looked at her and go, ‘Dad’s dead, isn’t he?’ Ashlynne said. “She didn’t have to say anything.”

But what came next only made the untimely death of their loving husband, doting father, and dedicated soldier that much harder.

According to Ashlynne, Nichole was essentially catatonic for three days after the loss of Jeffrey. Colten, who was 8, has autism, and didn’t understand what had happened. Weston, just 4 years old at the time, didn’t have the capacity to comprehend the notion of death yet.

Things got worse for the Haycock family before they got better.

“The fact that he died before he could even deploy was what was so hard for us to comprehend,” she said.

In the wake of his death, Nichole was left with a mountain of paperwork to sift through. The Army made them move off base six months later. Colten was denied admission to a program for the disabled, because his father didn’t die in a combat-related situation. Weston, Ashlynne said, didn’t just lose his dad, he also lost the house where he grew up — the only one he’d ever really known.

They were the first post-9/11 family to suffer a casualty at Fort Sill. And for Ashlynne, the few months she spent still attending the school on base provided little solace. Her classmates didn’t recognize what she was going through.

“We heard things like, ‘You’re not a military family anymore, you shouldn’t be here,’” she said. “Kids don’t understand.”

Local support groups didn’t help much either. Because a majority of the kids there had lost a grandparent or a distant relative, the Haycocks felt that no one could really relate to the incredible loss they had just experienced.

They reached a turning point, however, when Nichole returned to work and began putting all her effort into finding the best outlets for her children — namely the Tragedy Assistance Program for Survivors national seminar, which supports and advocates on behalf of all Gold Star families.

According to Ashlynne, the other survivors with TAPS became a second family.

Still, not everyone comes back from losing a loved one and is able to overcome it. For Nichole, the burden of the Gold Star became too heavy to carry. The loss of her husband was not something she could move past. She took her own life on April 25, 2011 — what would have been her and Jeffrey’s 19th wedding anniversary.

Ashlynne, who was then finishing her sophomore year at American University in Washington, D.C., lost her sole-surviving parent.

But she doesn’t blame her mother, nor is she upset with her.

“My parents, the way they loved each other, is something I could only describe as what you see in the movies, and she never got over it,” Ashlynne said. “It destroyed her.”

For nearly nine years after Jeffrey’s death, Nichole’s only mission was to focus on her children. But she herself never recovered after losing him. According to Ashlynne, her mother was also suffering from post-traumatic stress — something she didn’t even realize until a few years after her mother’s death.

“I want her to know I have no anger towards her,” Ashlynne said. “She protected us as much as she could.”

With the help and support of other survivors, and her extended family at TAPS, Ashlynne and her brothers have come a long way since the death of their parents. But they approach their family history very differently.

“I have my parents’ flags hanging in my living room, and I always want to talk about my dad,” Ashlynn said.

Weston, however, is more quiet about it. None of his roommates know that he attends college for free as a survivor, and he doesn’t keep family photos in his dorm room.

Though Ashlynne said he had a harder time when they were growing up, Weston is now on track to finish up college soon.

Ashlynne, as a result of experiencing firsthand what it means to pay for college alone as a survivor, now leads TAPS’ effort to make sure that all surviving family members can afford go to college without the burden of excessive student loans or debt.

She knows that her father, who wanted so badly for all his children to have the best education possible, would be proud of what she is doing for all other surviving families.

“My dad was my hero,” she said. “Everything I’ve done has been to honor him.”

The hardest days now come on the anniversaries of her parents’ deaths, holidays, and birthdays. But even more, Ashlynne said, she aches for the future life events they won’t be able to attend.

“It’s the idea that when I get married in a few years, my dad’s not going to walk me down the aisle. My mom’s never going help me pick out a wedding dress. They’re never going to meet their grandkids,” she said. “You don’t think about it until you’re living those events.”

When a blue star turns gold, she said, “everything changes, not just life without that person. But there is so much support out there if you’re willing to ask for help.”

If your family has lost a service member, the Tragedy Assistance Program for Survivors can help. Call 800-959-TAPS.