A significant portion of court-martial proceedings for Marine Corps personnel since the start of 2017 have included charges involving the... 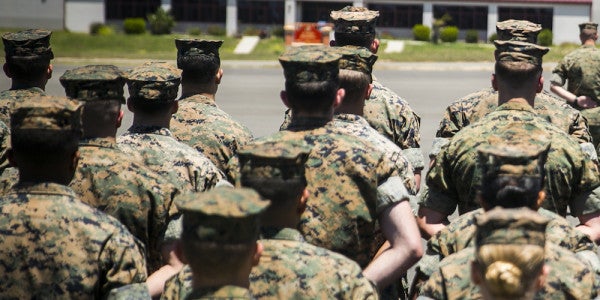 A significant portion of court-martial proceedings for Marine Corps personnel since the start of 2017 have included charges involving the sexual abuse of children, according to Department of Defense data reviewed by Task & Purpose, further detailing the growing scourge of child sexual abuse that’s marred the armed forces in recent years.

According to general and special court-martial disposition overviews of judicial proceedings published by Headquarters Marine Corps each month since January, nearly 18% of cases involved sexual assault or abuse of a child, attempted sexual assault or abuse or a child, or the possession, solicitation, distribution or production of child pornography.

Of the 23 Marines brought up on charges, only two were acquitted. The rest faced punishments ranging from forfeiture of all pay and allowances and reduction in rank to dishonorable discharge and 15 years confinement. Many of the cases included multiple charges.

How the child-abuse problem among Marines compares to other branches remains unclear. When reached by Task & Purpose, a Marine Corps public affairs officer declined to comment. The Department of the Navy’s Office of the Judge Advocate General and Office of the Secretary of Defense did not immediately respond to requests for comment.

A 2016 investigation by the Associated Press revealed 840 substantiated instances of sexual abuse of “military dependents” committed by enlisted service members between 2010 and 2014, according to a 286-page Naval Criminal Investigative Service report obtained by the AP. Officers were reportedly involved in 49 cases.

A previous AP investigation in 2015 revealed that 61% of the 1,233 inmates confined in the military’s prison network at the time had been tried and convicted of sex crimes — and in 133 of the 301 cases (44%) that occurred between January and November 2015, children were victims.

Despite the worrying statistics, the perceived increase in courts-martial among Marines may actually signal better prevention. In February, the DoD issued a directive expanding policies and responsibilities regarding child abuse prevention and family advocacy programs at various military facilities to increase reporting on instances of abuse. And according to Darkness to Light, the child sexual abuse-prevention program of choice at Marine Corps Base Quantico, implementation of that directive may have increased visibility and judicial treatment of the crisis.

“The directive didn’t just come down for FAP [Family Advocacy Programs] to provide prevention training that included child abuse, but created a requirement to report,” Darkness to Light communications director Gwendolyn Bouchie told Task & Purpose. “A lot of this was once handled on base or locally, but now it's been made clear that if there’s a report to be made, it must be made to law enforcement or child social services or whoever.”

But that duty to report doesn’t always translate into judicial action. While the sexual assault of children is explicitly prohibited under Article 120b of the Uniform Code of Military Justice (child pornography falls under Article 134), the opaque military justice system has faced difficulties in appropriately addressing the growing crisis of sexual abuse in the Corps’s ranks.

One arises from the new reporting structure: While the DoD has pursued state-level policies to encourage civilian law enforcement to report suspected abuse to the military (15 states have adopted such measures), a June report from Stateline.org indicated that the potential career-ending ramifications of an investigation induce military families to close ranks, keeping reports from reaching civilian authorities in the first place.

And even when service members eventually face court-martial, the outcome of their proceedings is murky. As the AP’s 2015 investigation noted, military judges are not permitted to review pretrial agreements offered to defendants in exchange for a guilty plea. In civilian courts, judges have the “final say” on any plea bargain, as the AP put it, but in military courts, suspected abusers “always get the lesser sentence.”

Rates of child abuse among military families have rapidly outpaced the rates among civilian families in the last 15 years, according data from the National Center for Child Traumatic Stress at UCLA and Duke University, an increase that coincides “with the post-9/11 rise in overseas military operations and deployments and the return of service members with physical and behavioral health issues.” Given that the Navy and Marine Corps have maintained a wartime operational tempo despite drawdowns in Afghanistan and Iraq, it’s likely that military communities are now experiencing the consequences.

“Military families are more vulnerable, especially in deployments with a single parent or someone acting as a single parent, stationed somewhere with a lack of support and forced to rely on people outside their innermost circle,” Bouchie told Task & Purpose. “If you compare branches and chart deployments and operations against rates of abuse, you’ll likely see some correlation there; when deployments happen, these vulnerable situations are created.”

It’s unclear how far this problem goes, but the 23 Marine Corps courts-martial pursued so far this year may only be the tip of the iceberg. While not every perpetrator of child sexual abuse is a pedophile, some 70% of child sex offenders have “between one and 9 victims,” according to Darkness to Light; another 20% of offenders have 10 to 40 victims, suggesting that countless other victims of American military personnel are languishing in silence.

Most recently, decorated Marine Col. Daniel Wilson was in November 2016 slapped with three charges of sexual assault and sexual abuse of a child in, removed from his duty post at Camp Lejeune in North Carolina, and confined to the brig while NCIS investigators explored unrelated sexual abuse allegations.

The victim was reportedly 6 years old.