On Oct. 11, Jennifer Johnson tried to kill herself. Addicted to cocaine and prescription opiates, still grieving from the death... 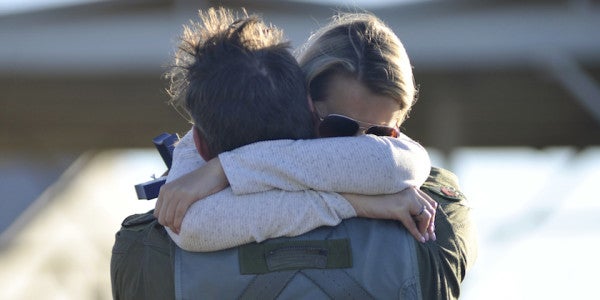 On Oct. 11, Jennifer Johnson tried to kill herself.

Addicted to cocaine and prescription opiates, still grieving from the death of her Army husband in Afghanistan five years ago, the New York woman believed she had reached bottom.

After the attempt, she decided to seek therapy, something she had avoided because she never wanted “to burden people.”

“It really was a pride thing,” said Johnson, 30, who has stayed sober since getting the professional help.

Johnson spoke to The San Diego Union-Tribune on Wednesday because she wanted to spare other military spouses from what happened to her — dabbling in drugs that led to addiction, being tortured by feelings of isolation and avoiding assistance for years due to the stigma of mental illness.

A groundbreaking study released on the same day showed that Johnson is far from alone in her experiences.

The report from the federal Substance Abuse and Mental Health Services Administration found that military wives are more likely than their civilian peers to abuse prescription medications meant to treat anxiety, attention deficit disorder and other psychological problems.

They’re also more likely than other married women to suffer from mental illness, consume liquor and binge drink, according to the analysis.

Related: Why More Military Spouses Need To Share Their Stories »

The relatively younger population of military wives partly explains the high levels of drinking, but the higher rates of mental illness might stem from the unusual hardships these women face — long periods of separation from husbands on deployment and the constant fear of those loved ones becoming injured or dying.

“Our job as the statisticians is to collect the information and pass it on to the prevention and treatment specialists, who can take a look at see if it marries up with their expectations and how we should respond to this information,” said Rachel Lipari, a military sociologist who was the report’s lead author.

Over the decades, there has been limited research on substance abuse and mental health issues among military spouses.

Lipari and her colleagues tried to fill some of this information gap by adding targeted questions to the annual National Survey on Drug Use and Health. It was the first time the Substance Abuse and Mental Health Services Administration decided to do so.

The researchers estimated that more than 29% of the nation’s 910,000 military wives ages 18 to 49 suffered mental illness within the past year and that about 23% received treatment for their problems.

Nearly 20% of women married to civilians suffered from mental illness last year and 17% got help for it, the survey indicated.

The findings suggest that Johnson and other military wives are twice as likely as other married women to fall through the treatment net, but researchers cautioned that they need to collect more data to properly measure the difference.

“That’s something we look forward to understanding better in future years,” Lipari said.

Johnson spoke of what she saw as breakdowns in the military’s outreach to the wives of deployed husbands based at Fort Drum in New York, most of whom lived outside of the base. She described the risk of these spouses getting overwhelmed by holding down jobs, raising children and worrying about their loved ones serving abroad.

“They really didn’t help me that much at all,” Johnson said.

“How I feel is that if you’re a military family and you actually physically live on post, you get more help than if you live off post. I have a lot of friends and I’d go to their houses on post and would have so much going on every day for my friends who are wives,” she added. “They had so much that the Army provided them with and I’m like, ‘I’m a military wife, too. Why am I not getting help like this?’”

Pfc. John “Corey” Johnson died from wounds suffered after a 2011 Taliban attack in Kandahar Province. The infantryman was 28 years old and left behind two children.

To his widow, the report’s findings about military wives should be a wake-up call for that community, alerting its members that help is available — that they don’t need to bear anxieties, household burdens and other stresses alone.

“Make sure that you seek counseling because it’s very crucial,” Johnson said. “If I could go back in time, I would’ve gotten into counseling immediately. And I should have and I didn’t because I thought I could do everything myself. Don’t be embarrassed. Don’t let your pride get in the way of getting help, of going and talking to somebody.”

The study’s authors didn’t delve into substance abuse and mental health challenges among the nation’s estimated 242,000 military husbands because that pool of survey respondents was too small to properly analyze.

And when they examined the estimated 524,000 military children between ages 12 and 17, they found no meaningful differences between those kids’ rates of drug use and mental illness compared with peers from civilian families.