The military advocacy group Blue Star Families recently released a report that shows military spouse unemployment could be costing the... 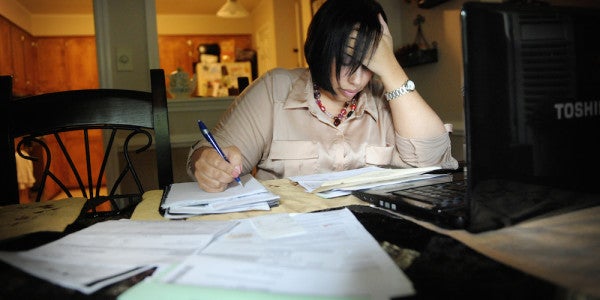 The data, which was collected by the Sorenson Impact Center, showed that military spouses experience higher rates of unemployment and underemployment and lower labor force participation rates than their civilian peers.

The numbers are disheartening. Right now, there are approximately 564,000 female military spouses nationwide, and unemployment rates among them sit at 18.8%.

Further, around 25% of civilian spouses don’t participate in the labor force, compared to 43% of military spouses.

“The math is shocking, but it also shows the way forward,” Kathy Roth-Douquet, CEO and Founder of Blue Star Families, said in a statement. “If we work together to reverse the crippling employment trends facing military spouses, we will add money back to our economy.”

Related: Mil Spouses: Convert Your Job Into A Teleworking Role »

“We are confident that the country can tackle this challenge in the same way we came together to reduce veteran unemployment several years ago,” Roth-Douquet added. “To ensure military households have a fair shot at achieving economic security, we need the involvement of all Americans.”