The Trump administration’s Jan. 23 freeze on hiring civilian employees for federal jobs is having unanticipated aftershocks within the military community.... 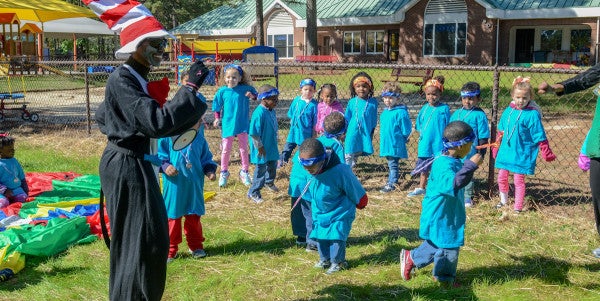 The Trump administration’s Jan. 23 freeze on hiring civilian employees for federal jobs is having unanticipated aftershocks within the military community.

At Fort Knox, the Child Development Center is no longer taking new children, and those families already signed up can no longer access hourly or “part-day” care, according to a memo released on Feb. 17.

At Wiesbaden, parents were informed that all part-day programs – including pre-school programs – are suspended beginning March 1 due to staff shortages.

Another letter from a military installation explaining that military families will lose childcare due to President Trump's hiring freeze. pic.twitter.com/xduPEkxHv5

According to the official White House memo on the hiring freeze, “no vacant positions existing at noon on January 22, 2017, may be filled and no new positions may be created, except in limited circumstances,” and the use of contractors to get around its provisions is forbidden.

The White House said the freeze “does not include or apply to military personnel,” and, as Bushatz reported, a Feb. 1 DoD memo exempts civilians working as military child care providers from its reach.

However, Bushatz writes that “Army base commanders are still required to get permission from the service secretary before filling positions, according to a Feb. 16 memo from Diane Randon, acting assistant secretary of the Army for manpower and reserve affairs.”

Emily Bewley, an Army wife whose family been stationed at Wiesbaden for about two-and-a-half years, says got news of the cuts via a memo given to her when she went to pick up her daughter from school on Tuesday.

“Most of the reactions that we saw were either shock or anger because we had no idea that this was even a possibility of happening right now or that there was such a shortage that it was even close to happening,” Bewley told Task & Purpose by phone from Germany.

While Bewley said the loss of her daughter’s pre-school education is the biggest impact on her family, the cuts are also impacting her work life, since she runs a home-based business. Now, Bewley says she is losing precious time with her husband and family, since work hours can only happen when someone else is home to share the parenting responsibilities.

And she’s not alone. Bewley said that families all over the post — including three with whom she shares a stairwell — are stuck figuring out next steps. For Wiesbaden families, she said, the only “viable options” are German kindergarten and pricey international schools.

The downsides of German kindergarten, she said, include the fact that it’s actually taught at a pre-K level, due to differences between American and German education systems; that it has early application deadlines, which occur in May of the year before the schooling begins; and that it often denies entry to American children due to the language barrier, since no classes are taught in English.

And while Bewley sent her older daughter to an international school for pre-K when her family first PCSed to Germany, the dramatically higher cost as compared with on-post options makes it a hard ask for military families.

“That is EUR 450 [$475.68 USD] a month compared to the $100 a month that we pay for pre-school on-base,” she said, adding that off-post commutes can also be problematic for families when most are down to a single car.

Bewley also stressed that the hiring freeze is causing shortages across the base at Wiesbaden – not just in terms of child care. She encouraged other military families facing similar circumstances to “speak up.”

Stateside, children of military parents Army who remember what it was like for their parents to find care for them while on active duty condemned the cuts on social media.

Alessandra Kellerman, a public speaker and crisis counselor who says she worked on military child care programs in Europe, tweeted Task & Purpose the following statement in response to the announced cuts.

While it’s unclear when the hiring freeze will end, Bewley encouraged other families to speak out against the freeze its impact on military families. “If, you know, Fort Knox and any other military installations who are experiencing this, or are going to experience this, if it’s happening, send it viral,” she said. “Let it be heard.”