The Military May Not Be A Family Business Much Longer

A 2013 Defense Department survey has resurfaced with regard to the future of military recruitment. A March 10 TIME article... 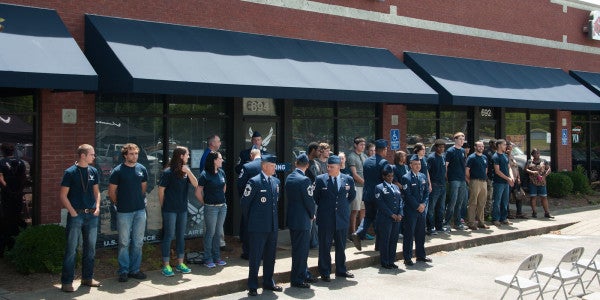 A 2013 Defense Department survey has resurfaced with regard to the future of military recruitment. A March 10 TIME article focused on concerns that the military as a “family business” will face an eventual decline.

The concern comes from the department’s survey results, which found that four out of five recruits have a close relative in uniform. The report defines a close relative as parent, grandparent, aunt or uncle, sibling, or cousin. For more than 25% of 2012 to 2013 recruits across the country, the relative is a parent who has served. The study was designed to be a census of all new recruits who participated in a delayed-entry program for the Army, Navy, Marine Corps, or Air Force.

Few would argue that coming from a military family brings unique benefits to new service members. The Baltimore Sun illustrated this by profiling a young Maryland National Guard recruit whose father is a career guardsman of more than 20 years. Having a family member serve personalizes what it means to be drawn to service based on experience, but also the value of having a family connection. These young people join the military with a much more thorough understanding of the commitment they're making, because they’ve seen their family members serve.

Related: How to recruit millennials into the military and keep them there »

The article, however, highlights the concern about an over-reliance on this connection. According to the article, “since the draft ended in 1973, being born into a military family has become a much more important marker of a future in the U.S. armed forces.”

The concern, more specifically, is that the high reliance on family connections will lead to an eventual drop in recruitment and the need to look outside of the family.

Military service as a family business is not a new phenomenon, but, there has been a demographic shift. As early as 2011, the Pew Research Center presented findings indicating that while most Americans have family members who once served or are currently serving in the armed forces, young adults are much less likely to have family ties to the military. Some 57% of those aged 30–49 say they have an immediate family member who served. And among those aged 18–29, the share is only one-third.

While the data are not new, the DoD’s findings came to light in a recent Senate Armed Services subcommittee hearing held on March 8. Sen. Angus King of Maine questioned the military’s relative dependence on legacy service members.

King said at the hearing, “This is going to put more pressure on the non-family member recruiting. We’ve got to reach outside the bloodlines.”

A quick look at the raw numbers reported by TIME sheds light on King’s concerns. The U.S. armed forces has had 1.4 million service members during the post-9/11 wars, which is less than half the 3.5 million troops serving at the peak of the Vietnam War. This decrease in the number serving means the pool of potential future recruits with a close relative who has served will also decrease. King’s concern is valid, but that's not necessarily a bad thing.

The DoD report was not focused solely on family connections to the military. There are also important data related to recruits’ sources of information and their motivation for serving that actually provide reason for optimism moving forward.

Recruits turn to various sources to learn about the military and their intended branch prior to joining. According to the DoD report, new recruits were most likely to say that the information a recruiter provided them was important to their enlistment decision, with a range of 71 to 77% of recruits citing this information as “important” or “very important” in their decision to enlist.

Personal connections such as family members and friends were also important, but not as universally important as the recruiter. Recruits also looked to the internet to provide them with information about their branch of service, with a range from 47 to 60% citing information from the service’s websites as “important” or “very important.”

Rather than bemoaning the shrinking “family business,” it's important to look to the opportunities these changes represent. Young recruits’ relationships with their recruiters are critical in the formative decision-making process prior to joining.

The services should take the opportunity to focus on ensuring recruiters are supported with the best possible resources and information to succeed in this critical role.

Similarly, the fact that young recruits are relying extensively on the information they find online — on their services’ websites in particular — offers a relatively cost-effective way to directly connect with the next crop of service members.

Finally, the survey found that most recruits are intrinsically motivated to join the military. Across all services, most feel that the military will better their lives in some way, either by improving them as an individual or by providing new future opportunities. This is an important piece of information to latch onto in recruitment across the services. Appealing to this sense of dedication and motivation is instrumental to maintaining the all-volunteer force.

With the family business shrinking, there is a new opportunity to dedicate more attention and resources to support quality recruitment.