The Military’s Problem With Marriage

Divorce — it’s no stranger to those in the military. At the same time, the military is a very tradition-minded... 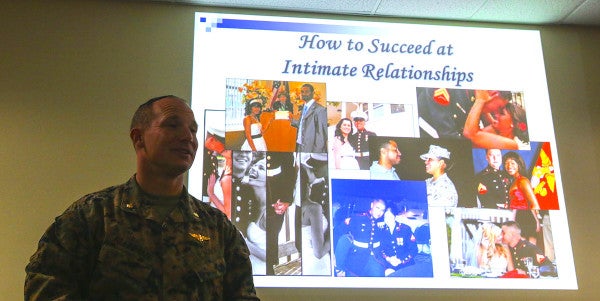 Divorce — it’s no stranger to those in the military. At the same time, the military is a very tradition-minded institution, so divorce is often treated like the family secret no one talks about. Statistics say that the military divorce rate was at 3.1% in 2014, which isn’t as bad as it has been, but still isn’t good.

While the official civilian divorce rate is actually slightly higher, at 3.6%, the statistics cannot be directly compared due to differences in data methodologies. Anecdotally, though, everyone in the military knows a fellow service member who has gone through a divorce.

Service members often marry young. Part of that is the rapid maturation the military forces on people, part of it is undoubtedly bad decisions based on housing allowance rates, and part of it is ironically likely the military’s old-fashioned views on marriage. Whatever the reason, marrying young is not a good indicator of matrimonial success.

Related: Unconventional relationships are the new normal in the military »

Add in the deployments, long hours, etc., and things don’t bode well for military couples. There are some marriages that thrive despite the challenges — as those in the military are fond of saying, “What doesn’t kill you makes you stronger.”

For others, though, what doesn’t kill them severely damages their relationships. The military sees a parade of failed marriages. To say that those failures lie at the feet of anyone but the people involved is to belie personal responsibility. Nevertheless, a failed marriage in the military faces all the difficulties of a failed civilian marriage plus some.

The military has a unique culture and unique rules. These can intersect with the civilian world in unique and difficult ways.

Actual court martial prosecutions for adultery without other aggravating factors are rare, because the one of elements of the military adultery offence is that it is contrary to good order and discipline or brings discredit to the armed forces, which is hard to prove. Nevertheless, some commanders have very black and white attitudes in regards to marriage. I’ve seen commanders order preliminary investigations for adultery on Marines who were legally separated at the time. Luckily, in those cases more realistic judge advocates injected sanity into the proceedings before careers were ruined. Those Marines’ reputations took longer to repair, though.

That black and white attitude toward marriage is surprisingly prevalent in an institution where divorce is commonplace. The military attracts strong personalities, and they tend to either be very religious with very traditional views of morality or very not. Those who are religious often have strong feelings about divorce. I once had a strongly devout senior officer who was going to bench me in a do-nothing staff position after he found out I was going through a divorce. Luckily, my immediate superior stood up for me and made sure I stayed in the flying job I was originally slated for. Unfortunately for others, not all career snubs are as blatant, and not everyone has a “rabbi” on his or her side.

On top of that, some hurt soon-to-be former spouses have in the past called up commanding officers and sergeants major, and in today’s “pro-family” military, those leaders usually picked up the phone to an earful of often highly exaggerated drama. Sometimes those senior leaders rightfully take it with a grain of salt. Other times, service members get chewed out or worse based on the spouse’s account of events that may or may not have happened as described. In either case, though, few service members enjoy being on their commanding officers’ or sergeant majors’ radar. Many units now have “human factors” or “commander’s safety” councils, wherein members’ personal lives are aired out in the name of “safety.” Guess who gets talked about in those? In today’s environment, where the phrase “perception is reality” is too often said without irony, too many service members end up with their reputations tarred.

The military has made a big push to be more family friendly in recent years. This is a positive development from the old days when people said, “If the military wanted you to have a wife, it would have issued you one.” As it tries to be better for traditional families, it needs to improve the culture for non-traditional ones, as well.