Military spouses often serve in many roles when their service member is deployed: second parent, family accountant, and in the … Continued 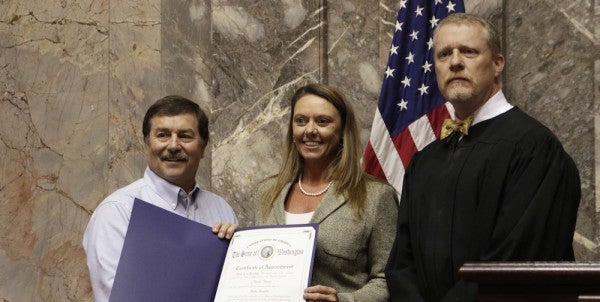 Military spouses often serve in many roles when their service member is deployed: second parent, family accountant, and in the case of a Centralia, Washington Navy couple: state senator.

Marlo Braun, wife of Sen. John Braun, was sworn in on July 18 to serve as state senator for their district while her husband attends Navy Reserve training, the Associated Press reports. John will serve as the commanding officer of a Navy Reserve detachment based out of U.S. Pacific Command at Camp Smith in Hawaii.

Wade Samuelson, a Lewis County District Court Judge, swore in Braun before the State Senate after her husband invoked a rarely-used law that allows for a district fill-in if a representative is called up to active service or training.

John didn't want his constituents to go unrepresented as state officials attempt to reach an agreement regarding a two-year capital budget and a water rights bill. He had originally requested former lawmaker J. Vander Stoep to serve in his stead, but when he was unavailable, John’s next choice was his wife.

A registered nurse, Marlo told the AP that serving in the Senate was never a job she intended to hold, but she is “happy to fill in for [John] while he's serving our country.”

Marlo, however, is not the first military spouse to be sworn in under this state provision. In 1990 and 1991, Sen. Mike Kreidler, served on reserve duty during Operation Desert Storm, and his wife Lela held his seat.

John’s term of duty started on July 15, and her appointment will last until “approximately Sunday,” AP reported.

In taking on her husband’s responsibilities while he serves, Marlo has gone above and beyond the call of duty, and helped to counter negative military spouse stereotypes in the process.

Task & Purpose reached out to Marlo and several military spouse groups for comment and will update this story as more information becomes available.