Stuck In Traffic, This Soldier Delivered Her Baby On Side Of The Road

The traffic on the Hampton Roads Bridge-Tunnel wasn’t moving. The contractions were coming two minutes apart. Her 19-month-old was in... 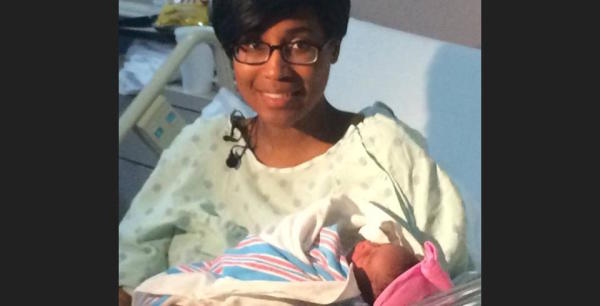 The traffic on the Hampton Roads Bridge-Tunnel wasn’t moving.

Her 19-month-old was in the backseat and her mother was driving.

But Latishe Andrews was not panicking.

The 28-year-old Army cargo specialist knew what she had to do Monday night: push that baby out. There was no waiting until she got to a hospital.

“I delivered her in my lap,” said Andrews as she cradled her baby girl Tuesday at Bon Secours DePaul Medical Center, where paramedics brought her after the delivery.

Both Latishe and Marrielle – all 6 pounds, 5 ½ ounces of her – were doing fine Tuesday afternoon. Latishe is new to Virginia Beach. She spent the last three years in Germany and just moved here a few weeks ago to be stationed at Joint Expeditionary Base Fort Story.

Her mother, Evelyn Andrews, traveled from Texas on April 8 to help out.

When her older daughter, Kerrielle, was born 19 months ago, Latishe was in labor for 26 hours, so she expected a similar experience for her second daughter’s birth.

When her contractions started at about 8:30 p.m. Monday, she, her mother and Kerrielle started heading to Langley Air Force Base hospital.

They left from Virginia Beach as fast as they could, with Evelyn driving her daughter’s 2015 Jetta. But they got stuck. A Virginia Department of Transportation spokeswoman said crews had stopped traffic to set up a lane closure for work at the tunnel.

“By the time we got almost to the tunnel, traffic was halted,” Evelyn said.

Now what? she wondered.

But that wasn’t going to happen.

Out of the corner of her eye, Evelyn could see her daughter moving around.

So she pulled off the road, near the 15th View St., inspection station, and starting honking over and over, trying to get someone’s attention.

Margaret Harris, a VDOT worker, came over and Eveyln told her there was a baby, and they needed help.

Then Evelyn remembered that the umbilical cord needed to be tied, so she used her shoelace.

Soon an ambulance arrived, and Latishe and baby Marrielle were whisked off to DePaul.

When the contractions started, Latishe had called the father of the two girls, LaMardes Fields – also an Army cargo specialist, stationed at Fort Eustis – to meet them at the hospital. So he headed to Langley. When he got there, he told hospital staff he was waiting for Latishe, and they said she was on her way.

After 30 minutes, he got a second phone call: the family was actually at the hospital in Norfolk, and the baby had been born in the car. He couldn’t believe it.

“She’s independent, like her mama,” he said about his new daughter. “She was ready to go.”

Evelyn was surprised at how her daughter was able to give birth in the car and remain calm.

“I’m amazed that her instincts as a mother kicked in,” she said.

The baby wasn’t due until May 10, but the family had been getting ready, just in case.