A little over a decade ago, Army medic Bill Kohler had a hard time adjusting when he came back from... 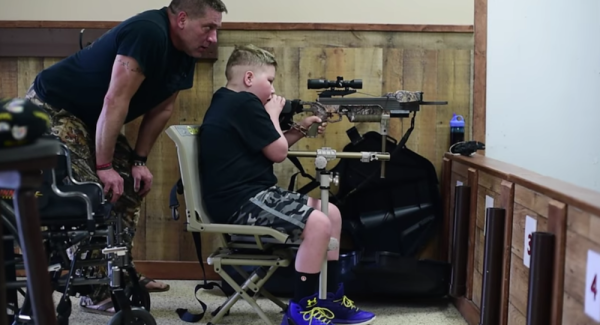 A little over a decade ago, Army medic Bill Kohler had a hard time adjusting when he came back from serving in Iraq. Then his son Ayden was born.

And now it’s his turn to give Ayden the best life he can, in a very short amount of time.

In August 2016, nine-year-old Ayden collapsed while running a lap at football practice. Doctors first thought it was a concussion, but then he began to lose motor skills and cognitive abilities, and Kohler got the worst news a parent can get: His son has cancer.

Called diffuse intrinsic pontine glioma, Ayden has two tumors: One in his cerebellum and the other his brain stem, and he was given only eight to 12 months to live.

So Ayden made a bucket list, and his dad is helping him cross off the items. Among items like hunting, seeing a WWE match, and watching a Wizards game, his list also includes a special if not heartbreaking request.

Ayden loves being outdoors, Kohler said. Between basketball, football, wrestling, and hunting, he added that before the tumors, Ayden was rarely not outside, and he wants to be with his son whenever and wherever he can, for as long as they have together.