When The Costs Of War Impact The Capacity For Intimacy

During my college years, I worked for a urologist. If there was one lesson I learned, it was that while... 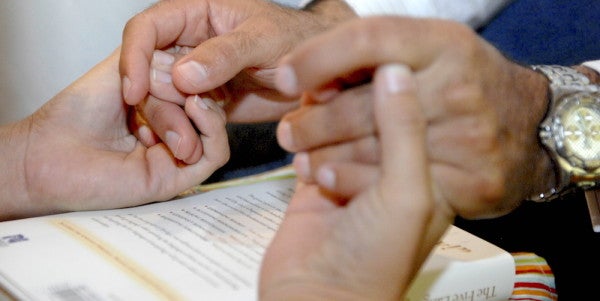 During my college years, I worked for a urologist. If there was one lesson I learned, it was that while there are many conversations we don’t want to have, some of them are absolutely imperative. Ignoring problems — whether it’s an elevated prostate specific antigen or low sperm count — no matter how embarrassing, doesn’t make them go away and can often make them much worse. One problematic fact that is likely both embarrassing and not going away is that sexual dysfunction within the military is on the rise, and those dealing with the issue are often left with little recourse.

Last summer, a study published in The Journal of Sexual Medicine found that 33% of American military men ages 21–40 reported erectile dysfunction. Let that sink in, because that likely isn’t the total; it is only the number of men who actually admitted to it in an online survey. In 2014, the Department of Defense filled over 100,000 prescriptions related to erectile dysfunction for active-duty service members. As previously reported by Task & Purpose, this is one more cost of a long war — we are fortunate that survivability rates are so much higher than in previous conflicts, but we’re being presented with new challenges that Tricare and the Department of Veterans Affairs have yet to catch up with, and one that many service members and veterans find difficult to discuss.

Research has demonstrated that nearly 20% of personnel returning from deployments have sustained at least one physical injury, with those who received physical injury during a deployment three to seven times more likely to report erectile dysfunction. This, of course, doesn’t include those who return home with a less visible injury, like post-traumatic stress disorder or depression, which can trigger sexual function issues on their own, or lead to the use of medications that hinder sexual function or libido. Nor does a diagnosis of erectile dysfunction fully encompass the nearly 2,000 personnel who received genitourinary injuries between 2000 and 2013 and face lifelong complications like infertility. Women are not immune from this; although as they have been taken on increasingly more dangerous jobs, body armor specifically designed for women, with higher waistlines to protect their reproductive organs, has not yet been provided.

While the Department of Veterans Affairs provides up to $100,000 through the Servicemembers' Group Life Insurance Traumatic Injury Protection Program for severely injured service members to aid in their recovery (with up to $50,000 to go toward genitourinary injuries), the benefit can be capped. As detailed by the University of Southern California’s Center for Innovation and Research on Veterans & Military Families, even for service members who sustained multiple injuries, they can not receive more than $100,000 toward recovery, and the costs of long-term treatment can quickly exceed the benefit — meaning that service members eventually bear the costs of the injuries received in combat.

For example, Tricare only provides limited coverage for infertility and under very strict parameters, drawing the line at third-party donations or surrogacy. If a combat injury were to result in a hysterectomy for a woman, or the inability of a man to produce sperm, there would be absolutely no recourse for either one under Tricare, even though the injury was sustained in the line of duty. Tricare will also not cover preemptive measures one might take prior to deployments, such as egg harvesting or freezing sperm, nor the storage costs, essentially abandoning military service members to either bear the costs themselves or risk coming home unable to bear children.

The costs of war are proving to be staggering, whether we evaluate them in terms of money spent, loss of life, the risk to military children, or the long-term unknowns regarding injuries sustained. Conversations regarding the topics of genitourinary injuries and sexual dysfunction as a complication of PTSD or traumatic brain injury are ones that are absolutely necessary to have, both to bring awareness to the topic and to bring about discussions of what should be provided by the military in order to keep promises made to service members and their families.

If someone is injured while carrying out their duties, shouldn’t the DoD have an obligation to restore that individual as fully as possible, at no cost to the service member or their family? If Tricare will not cover third-party donations or surrogacy, why not allow service members the option to prepare before deployments for the possibility they might sustain injuries that render them infertile?

While it might be too late for this war, it certainly isn’t too early to prepare to answer these questions in time for future conflicts.