Why Some Dog Breeds Are Banned On Base Housing

In 2009, the Army and Marine Corps banned a number of “aggressive or potentially aggressive” dog breeds from base housing … Continued 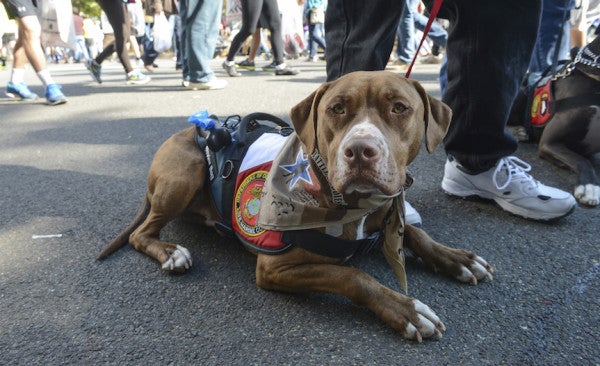 In 2009, the Army and Marine Corps banned a number of “aggressive or potentially aggressive” dog breeds from base housing both domestically and abroad. Three years later, the U.S. Air Force enacted a similar uniform policy.

Prior to the implementation of these policies, Fort Hood moved to ban select breeds on its own as Army officials began looking into pet policies after 11-year-old Seth Lovitt was attacked and killed on base by his family’s pit bull when the dog jumped off the couch and bit him in the neck, according to Dogsbite.org.

Upon reviewing post records, military officials found that from 2003 to 2009, 68% of the dogs declared dangerous were pit bulls. As a result, an Army pet policy was implemented in January 2009.

Task & Purpose reached out to the animal shelter at Fort Hood, which reported that despite the ban on these breeds, it has not seen an increase in the number of dogs given up by military families living on base.

Based on the written regulations, if a service member and his or her family has a restricted breed, they must either get rid of the pet or seek housing off base.

Though restrictions on breeds vary by base and service, a number of breeds are universally banned including pit bulls, rottweilers, doberman pinschers, chows, American bulldogs, akitas, and wolf hybrids.

In an email with Task & Purpose, Corynn Myers, the national public relations director for the group Dogs on Deployment, said, “I know that across the nation, there are certain breeds that are restricted from on-post housing. As to reasons why certain breeds are restricted, I would take a guess that it's all about liability and insurance costs.”

The banned dogs have been cited by the services as particularly aggressive or dangerous, though there is little statistical data on the issue. The policy is seemingly a precautionary measure.

However, because the policies initially coincided with the privatization of base housing, there is a lack of consistency across the services regarding housing pet policies, as each management company has different enforcement policies — specifically in terms of addressing numerical pet limits and banned breeds.

“Generally you don’t want an aggressive dog living in your neighborhood,” Costlow said.

However, Costlow added that the military doesn’t necessarily police every family dog that is brought into base housing.

“There is no strict inspection of animal breeds prior to move in, but complaints by neighbors are dealt with according to the severity of that complaint,” he said. “We're careful in the way this policy is enforced because most people consider their pets to be family members.”

Exceptions may also be made on a case-by-case basis, especially if the animal in question is a service dog. Moreover, garrison commanders have the authority to grant exceptions or make the policy more restrictive if they see a trend in violations for example.

“We play it by ear, and we ask people to follow the rules,” Costlow said. “Basically, it’s to protect people.”