Robin Olds personified the hard-fighting, hard-living, no-nonsense pilots who made the US Air Force the worlds most lethal and effective air service on earth. 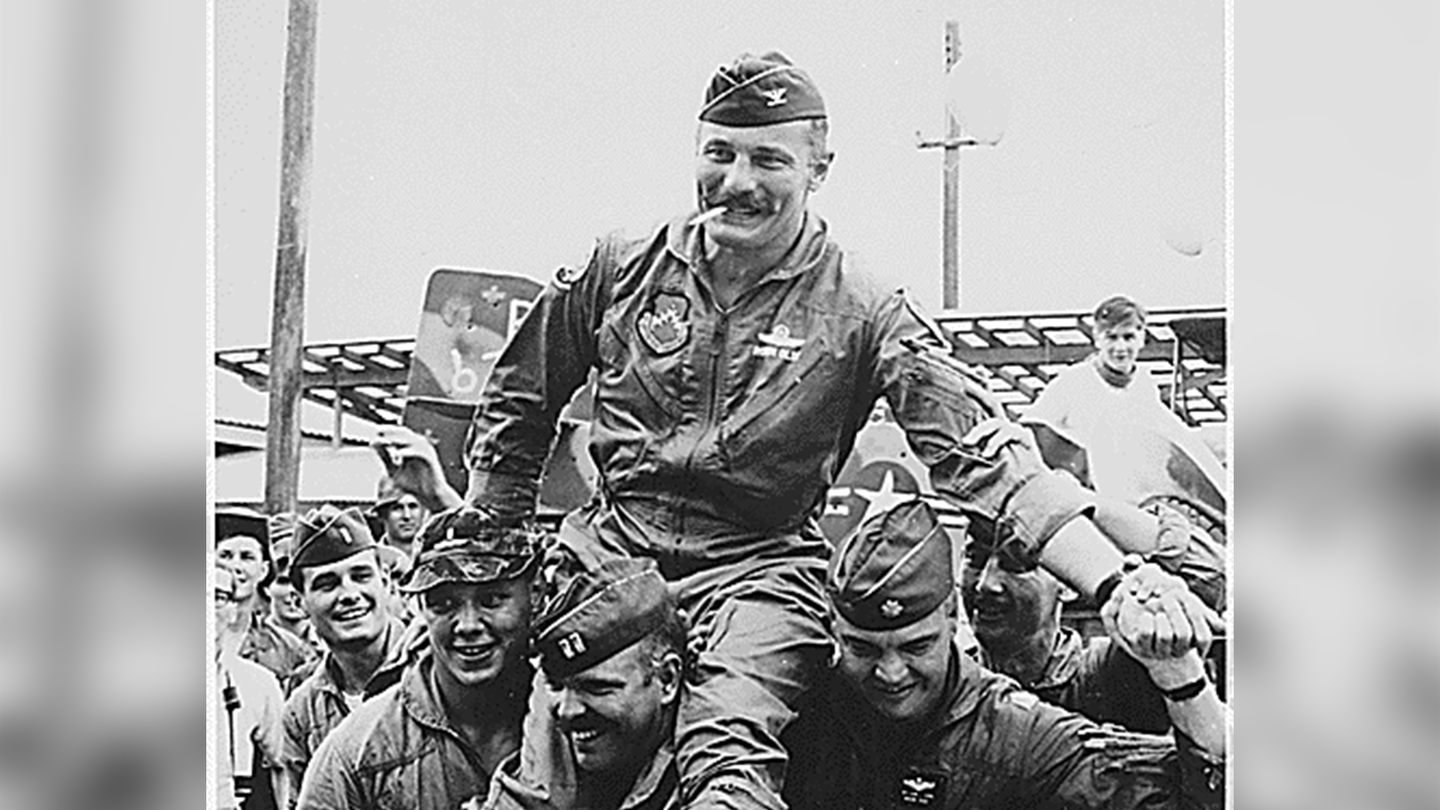 “It became the middle finger I couldn’t raise in PR photographs.”

That was how U.S. Air Force fighter pilot Robin Olds has described his epic facial accessory. However, the perfectly groomed, waxed, and massively out-of-regulation mustache then Col. Olds cultivated while serving as a wing commander during the Vietnam War was just the cherry on top of a storied career that literally grew along with the Air Force.

Born in 1922 to Robert Olds, an officer who served in the Army Air Corps during World War I and was heavily involved in the post-war development and modernization of the Army’s flying service, Robin was raised with the men who would go on to achieve infamy in what would become the US Air Force.

Attending West Point in 1940, Olds applied for and was sent to preemptive flight training with the intention of becoming an air cadet under the wartime early graduation pilot program. Foreshadowing his future career, he displayed outstanding personal skill and dedication to his military responsibilities, while disdaining the more formal regulations and requirements of the service. At the Academy he was selected as an All-American linebacker (being inducted into the NCAA Football hall of fame in 1985), and also reduced in rank from Cadet Captain to Cadet Private for drinking alcohol when forbidden to do so, walking punishment tours until the day he graduated in June 1943.

A newly commissioned second lieutenant, Olds was sent directly into the combat training pipeline, being assigned to the P-38 Lightning. By May 1944 his unit was flying combat missions in preparation for the D-Day invasion of Normandy, and on August 14 of that year now-Captain Olds achieved his first air-to-air kills, shooting down two German FW-190s.

Nine days later during an escort mission, he shot down two Bf-109s during a vicious dogfight over Germany, achieving one kill while his engines were dead due to a malfunction. On the return leg of the same mission, he shot down a third Bf-109, making him the first ace of his fighter group, only three months after arriving in theater.

Olds racked up three more kills in the P-38 before his unit made the transition to the newer P-51 Mustang, in which he shot down a final Fw-190 over Berlin before ending his first tour in November of 1944.

Two short months of leave later and he was back in England flying combat missions by January of 1945. The same day he was promoted to Major he achieved his seventh kill, shooting down another Bf-109.

By the end of the war Olds was in command of his own fighter squadron, had been awarded two Silver Stars, and was officially credited with 13 aerial kills and 11.5 more destroyed on the ground, making him the only pilot to achieve ace status in the P-38 and P-51 aircraft.

The year after the war, while assigned to a unit in California he met and began to date Hollywood actress Ella Raines. By 1947 they were married and would stay together another 29 years.

Despite a pattern of bucking a system that he felt wasn’t focused on warfighting, Olds continued to rise in rank, alternating between staff and training unit roles which kept him out of combat in Korea. In April of 1953 Olds was promoted to Colonel, one of the youngest officers in that grade.

During the interwar period Olds continued to run into difficulties with peers and superiors whom he disagreed with, once barely avoiding a court martial when he founded an unauthorized jet-fighter demonstration team using the pilots under his command.

In 1966 Olds was finally given another combat assignment, the 8th Tactical Fighter Wing operating out of Thailand in support of air operations over Vietnam.

Now flying the F-4C Phantom, Olds would plan and lead Operation Bolo, which was the largest aerial sweep of the war, resulting in 7 MiG-21 kills (including one by Olds himself) and complete aerial domination of the AO for the next several months.

Early in his tour Olds had also begun to sport what would become his trademark mustache, drawing the approval of the airmen under his command and the ire of his superiors. During his time in Vietnam, Col. Olds would shoot down four MiG-21s, making him a triple ace and one of the few pilots to achieve aerial kills in two wars, using multiple airframes (P-38, P-51, F4).

His direct leadership style, personal skills as a fighter pilot, and general notoriety would lead to a variety of flamboyant mustaches across the 8th TFW.

Col. Old’s last combat mission of his career was in September 1967. Accumulating 259 missions, thousands of flight hours, and 17 air-to-air kills.

After his tour to Vietnam, in what would become something akin to an Air Force urban legend, Old attended a meeting with General John McConnell, the USAF Chief of Staff. Without a greeting McConnell walked directly up to the fighter ace, pointed at his mustache and ordered him to “take it off.”

Like any good subordinate, Old said “yes sir” and promptly shaved off the now infamous ‘stache.

However, the incident has taken on an almost mythical status and is credited for starting the Air Force tradition of Mustache March, where airmen do their best to stretch the limits of personal grooming regulations in solidarity with Old’s legendary whiskers. Olds was promoted to Brigadier General and went on to hold several more prominent non-flying roles, including commandant of his alma mater, the Air Force Academy, and as a special inspector to deployed fighter wings operating in Vietnam. While there he found units suffering from a lack of basic dogfighting and tactical skills, resulting in a kill ratio far worse than their Navy and Marine counterparts. When his offer to take a reduction in rank to assume another combat wing commander role was rejected he submitted his retirement papers. Robin Olds personified the hard-fighting, hard-living, no-nonsense pilots who made the US Air Force the world’s most lethal and effective air service on earth. You can learn more about American military legends like him in series like Untold: Patriots Revealed on Fox Nation. Active military and veterans can get a one-year subscription absolutely free and enjoy all of their amazing programming. For instructions and programming details check them out here. You’ll be glad you did.