From the Mekong Delta to the Korengal Valley, and every battle in between, the M16 family of rifles has performed... 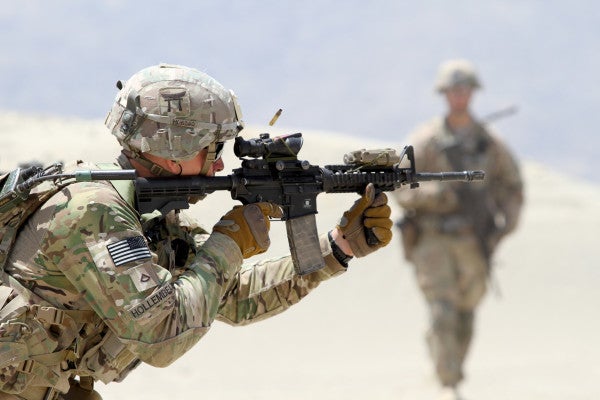 From the Mekong Delta to the Korengal Valley, and every battle in between, the M16 family of rifles has performed valiantly in the hands of American soldiers for decades. But as the poet Bob Dylan once said, “The times, they are a changin’.”

The U.S. Army is officially on the hunt for a new rifle to replace the M16 family of weapons.

The new platform being sought out is going to be completely different, including a new caliber that isn’t currently a part of traditional military stock. Just as the nature of warfare has changed, the Army realizes that its rifles must also change. The service has said it wants a more reliable rifle that can reach farther with more punch, while avoiding a significant weight gain for already overburdened infantryman. As the tests are ongoing, here are the five things you need to know about the plan to pick the U.S. Army’s next battle rifle.

1. The M16 family of weapons is officially considered out of date.

First used by Air Force units in Vietnam, the M16 rifle was widely adopted by the Army and Marine Corps despite early issues with reliability that led to unneeded American deaths in Southeast Asia. The rifle has gone through various improvements and upgrades over the years, with most combat units now using the shorter, lighter M4 variant.

“The term 'old' has an entirely different meaning in the world of small arms,” said Mike Friedman, director of logistics for Project Manager Soldier Weapons, in a statement given to PEO Soldier public affairs. “Small arms weapon systems don't share the same obsolescence cycles as some products like electronics or computers do. Age is not the yardstick, performance is.”

In a recent interview with Army Times, retired Maj. Gen. Robert Scales said that improvement in enemy body armor, an emerging overmatch with opposing forces, and the continued issues of reliability with the existing M16 family have all contributed to the platform being considered out of date at this point.

“Front-line Army and Marine riflemen still fire weapons much more likely to jam than the AK‑47. Failure to feed affects every aspect of a fight.” Scales wrote in an essay published in The Atlantic in 2015. “A Russian infantryman can fire about 140 rounds a minute without stopping. The M4 fires at roughly half that rate.”

2. The new rifle will shoot an intermediate caliber.

The U.S. Army currently employs the 5.56mm caliber for its battle rifles and light machine guns, and the 7.62mm for its heavy machine guns and some sniper rifles. The new platform will likely use a more unconventional round that isn’t currently in use by the Army, according to Army Times. The .260 Remington, 6.5 Creedmoor, and .264 USA are being tested for their suitability in combat, all of which are larger than the current 5.56 round. The 6.5 Creedmoor is a very popular round in the shooting community, and is concurrently being tested by the U.S. Special Operations Command for use in a new sniper rifle.

3. The new rifle will solve the overmatch issue.

In the 2012 Army Strategic Planning Guidance, then-Secretary of the Army John H. McHugh and Army Gen. Raymond Odierno, said “We will ensure that our squads are never again in a fair fight.” Achieving overmatch has been a priority for ground combat forces in recent years, but our present enemies and potential adversaries have rifles such as the venerable AK-47, that can shoot farther, hit harder, and are more durable in field conditions than those used by the Army’s typical infantry squad. Leaders are very aware of that fact, so the next rifle must achieve overmatch by extending the range and lethality of the infantry rifleman, without sacrificing precious pounds added to the basic load. It must be less prone to malfunctions and require less maintenance by soldiers who find themselves in extended field conditions.

4. The new ammunition may be made of polymer.

U.S. Special Operations Command is testing a polymer version of the 6.5mm round, as of April, and the rest of the Army is paying very close attention to the results. The polymer 6.5 round would reduce the weight of the 7.62 by a third, and actually come close to the weight of the currently issued 5.56 ammunition. One ammunition manufacturer claims that polymer-based ammo is “lighter, more accurate, generates lower recoil and shoots more flat than conventional ammunition with comparable loads.”

Although plastic ammunition may seem counterintuitive to anyone who knows what it’s like to have your life depend on a rifle and its ammunition, the benefit of more power and range while maintaining nearly the same weight is a very attractive option.

Progress toward the selection of the new rifle and its ammunition is currently dependent on the results of the Small Arms Ammunition Configuration study. The study has been in progress since 2014, and is expected to wrap up in the next three months. The earliest prototypes will be available as soon as 2020, where they will continue to undergo extensive testing.

Replacing the standard battle rifle for the entire Army is a significant investment of both time and resources, which means leaders will have pressure on them to get it right the first time.