It goes by many names: Deuce gear, TA-50, or 782 gear. Whatever the nickname, load-bearing equipment is some of the … Continued 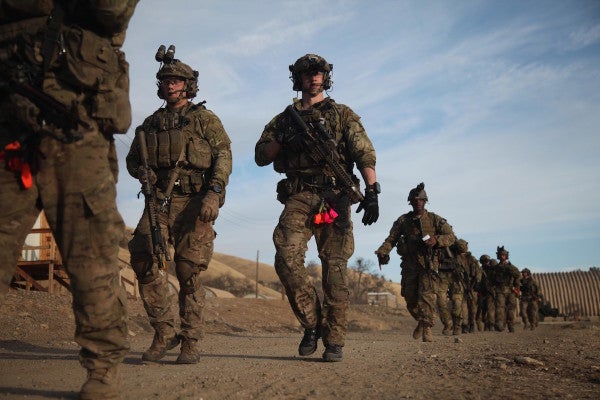 It goes by many names: Deuce gear, TA-50, or 782 gear. Whatever the nickname, load-bearing equipment is some of the most important kit carried by infantry, special operations, and anyone else whose job is to fight on foot. Since the advent of modular lightweight load-carrying equipment and the accompanying pouch attachment ladder system in the late 1990s, the commercial and government gear market has rapidly grown, particularly since the onset of operations in Afghanistan and Iraq. “Tactical nylon” companies are not just producing innovations in load-bearing gear, but uniforms and footwear as well. Here’s a few areas where troop gear has gotten better.

The development of lighter ceramic armor plates like the enhanced small arms protective insert plate has marked a shift toward the plate carrier as the preferred option for individual protection. The newest plate carriers the Army currently issues include the soldier plate carrier system and the improved outer tactical vest, while the Marines use the improved scalable plate carrier and improved modular tactical vest. Commercially, there are dozens of companies producing plate carriers, with models from Crye Precision, London Bridge Trading, and Eagle Industries popular among special operations units and others able to use non-issued gear.

One recent innovation has come in the design of armor plate itself. A soft armor backing is often required to protect the wearer from “spalling” debris that may break off a plate if it is struck by incoming rounds. But some companies are now offering standalone plates with “Level IV” protection, which is the highest protection rating given by the U.S. Department of Justice’s National Institute of Justice; making it even easier to get maximum protection in one package.

A lot of tactical gear nowadays is moving beyond cordura nylon. Laser-cut fabrics and laminates are shaving more weight off, resulting in sturdy load-bearinggear that weighs in at under a pound. That’s crucial considering the increased load of armor, communications, and ammo that has become the norm over the past 15 years of war. These new materials also help protect gear from abrasions, water damage, and chemical degradation. Polymer gear has also become popular. Thermoplastic holsters and carriers provide better retention of items like sidearms and magazines, while allowing easier access compared to older closed flap and bungee pouches.

The advent of modular lightweight load-carrying equipment meant a more modular system for attaching gear to a load-bearing platform. But anyone who’s spent time weaving MOLLE pouches onto a vest knows how laborious it can be. MOLLE has given the end user more options, but switching between those options isn’t a fast process. Recently, gear companies have begun to offer solutions that allow the user to quickly change loadouts. Velcro-backed panels and chest rigs combined with quick-detach buckles allow for fast changes between different combat loads. Adjustable pouches can carry a wider variety of magazines, tools, radios, and other equipment. There are now even plate carriers built from the ground up to have adaptable components. All this makes it even easier to use one load-bearing platform for multiple roles.

The War on Terror’s unconventional insurgent battlefield created requirements for operating among the civilian population. As a result, there evolved a new need for low-visibility kit that wouldn’t overtly advertise ammo and equipment, especially among special operations troops and private military contractors. Companies have released “slick” armor carriers and belts that allow the user to carry a basic load of ammo, communications, and medical supplies while maintaining a undercover posture. This is a huge benefit for special reconnaissance, surveillance, and VIP security operations.

The pistol belt has seen a resurgence in recent years, and has evolved into several new styles of products. Padded belts with MOLLE capability, often called “battle” or “war” belts, have shifted focus to the “first line” — the basics that allow one to move and fight. A good belt setup can carry water, first aid, and ammo; these are the baseline of the fighting load. Another evolution has come with addition of velcro, allowing for an inner belt system that keeps the outer belt from shifting around when the user runs or changes stance. This has also allowed for lower-profile belt carriage that is suited for low-visibility operations.

Even the simple boot has seen some major development. Over the past decade, commercials hiking boots have gained popularity among troops. Companies have taken notice and are now offering hiking-style footwear specificallyaimed at the military market. A good pair of boots can really make all the difference during an extended patrol or field operation.

Combat is undoubtedly never comfortable, but there have been major strides taken in reducing some of the discomforts that come with wearing kit for extended periods of time. The “combat shirt,” designed to provide more ventilation when worn under armor, is now a common sight for deployed service members. Integrating kneepads into uniform pants helps to eliminate the “ankle pad” syndrome that traditional strap designs often suffer from. Aftermarket helmet liners and retention systems ensure a more comfortable fit. Some advances go beyond mere comfort. Uniforms like the Marine Corps’ fire resistant organization gear and its replacement, the enhanced flame-resistant combat ensemble are designed to prevent the burn injury prevalent in victims of improvised explosive device strikes.

There are only so many ways the make a magazine pouch, so many of tactical nylon companies are offering similar products. This is not inherently a bad thing; it gives end users more options and ensures that their needs will be met even if their first choice of equipment is not available. As the tempo of overseas deployments and urgent gear requirements slows, it will become more difficult for so many companies to eke out an existence in a shrinking market. For the time being, however, troops have plenty of options to meet their needs and preferences for combat kit.

The gear market has produced rapid innovation in a remarkably short period of time that has transformed the way infantrymen, special operations, and anyone else who carries firearms for a living carries their equipment. The future remains unclear, with powered exoskeletons and improved armor being some surmised improvements. What is certain is that for every new piece of equipment or technology, troops will need a way to carry it.