82nd Airborne Division Gets Hooked Up With New All-Terrain Vehicles 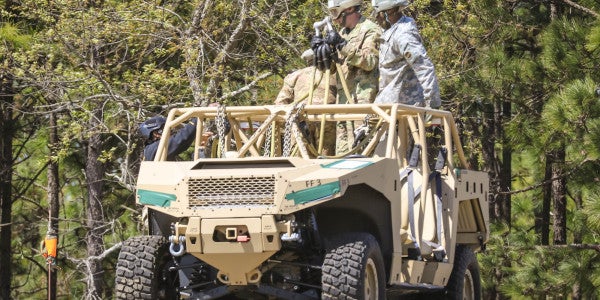 DAGOR vehicles, which can carry up to nine troops with a gunner, have been in the field for the past month as paratroopers from the 3rd Brigade Combat Team have mastered how to handle them. The vehicles are small enough to be slingloaded under UH-60 Black Hawks and sturdy enough to parachute from C-130 and C-17 aircraft.

Earlier this year, Canada's Special Operations Forces Command started receiving a fleet of DAGOR vehicles. They will be mainly used for off-road operations, and weapons turrets will be installed on their vehicles, according to Canadian reports.

The DAGOR vehicles were added to the 82nd Airborne Division's fleet on the heels of MRZRs, which were fielded by the 2nd Brigade Combat Team in October 2014. The combination of these light tactical all-terrain vehicles bolsters the division's ability to multiply forces and enhance efficiency.

The vehicles aren't a fighting platform, but will be used to move troops cross country, and can be used as a non-standard casualty evacuation vehicle.

The vehicles are agile enough to navigate rough terrain. They can reach up to 70 mph, but soldiers using them as stealthy transportation probably wouldn't reach that speed.

Since there's nothing comparable to it now, it unlocks new opportunities for soldiers traveling on the ground.

“It brought us the ability to move our soldiers through terrain restricted by other vehicles,” Hansche said. “We can get our guys to the objective with fresher legs.”

Troops generally use Humvees to navigate areas. But if the land is too rugged, they are forced to walk and carry their heavy equipment.

On some missions, soldiers can be moving with their equipment for hours, which can be fatiguing.

Staff Sgt. Alexander Calpo, a 3rd Brigade Combat Team infantryman who's been training on the vehicle, said the vehicles would be ideal for mountainous terrain.

“It can definitely do rock climbing and get into areas that most Humvees can't access,” he said.

Calpo touted the burden the vehicles take off the warfighter.

“Without it, soldiers dismount and walk and that drains energy,” he said. “These boost morale. Even seasoned soldiers have said this was a game changer in their minds.”