The A-10 Warthog Isn’t Going Anywhere — Yet

If President Donald Trump gets his way, the A-10 Thunderbolt II, lovingly nicknamed the “Warthog” by U.S. Air Force pilots, … Continued 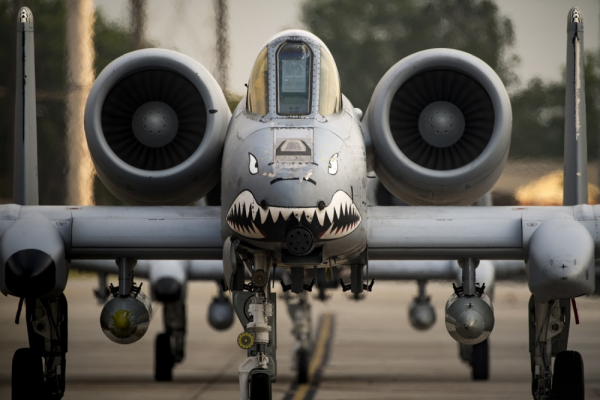 If President Donald Trump gets his way, the A-10 Thunderbolt II, lovingly nicknamed the “Warthog” by U.S. Air Force pilots, will remain a crucial part of the Pentagon’s arsenal for years to come.

The Department of Defense’s fiscal year 2018 budget proposal, published on May 23, “fully funds the entire fleet of 283 A-10 Thunderbolt IIs” and vows that the Warthog fleet’s long-term viability “will be assessed as the Air Force determines a long term strategy.”

The Warthog, first built by Fairchild Republic in the 1970s and known for the characteristic “BRRT” of its devastating 30mm cannon, is just one beneficiary of the Pentagon’s proposed commitment to modernize and recapitalize legacy aircraft that, in the DoD comptroller’s words, offer “a cost-effective platform to provide capacity for today’s operations and tomorrow’s threats.”

Speculation has swirled for years around the Pentagon’s efforts to develop a close-air support aircraft that could potentially replace the aging A-10 fleet in the Air Force’s arsenal. As Defense News reported in 2016, the Air Force attempted to retire the Warthog in both FY2015 and FY2016, only to face pushback from Congress.

The DoD has vacillated on whether to abandon the storied attack warplane. In its FY2016 request, the service abandoned the idea of fully retiring the Warthog, due to the aircraft's spectacular performance against ISIS militants in Iraq and Syria. And in October 2016, Air Force Materiel Command Gen. Ellen Pawlikowski reiterated that the Pentagon plans on sustaining its fleet “indefinitely.”

But the service recently solicited defense contractors to participate in the OA-X light-attack aircraft experiment at Holloman Air Force Base in New Mexico this coming July to “augment” the A-10. So far, the A-29 Super Tucano, Beechcraft AT-6 Wolverine, and AirLand Scorpion are set to compete at OA-X.

While observers speculate that one of those warplanes may eventually replace the A-10 upon retirement, the DoD’s 2018 budget proposal seems to suggest the service is no longer itching to retire the legendary aircraft.

The DoD’s budget proposal is just that: a proposal. And a spokesman for Air Combat Command threw cold water on the idea that the budget request is a firm pledge to modernize and maintain the A-10 indefinitely.

“Any questions about the president’s budget proposal fall to the president,” Maj. Andrew Schrag, a spokesman for Air Combat Command, told Task & Purpose. “Congress debates and adjusts and manages all of these proposals, and months from now, we may or may not have the budget, and then we start making adjustments, and even those adjustments occur at a DoD level.”

So the Warthog’s future isn’t a set in stone as the DoD’s budget proposal might suggest. But given Congress’ past enthusiasm for the A-10, chances are enemy combatants will find themselves fearing the “BRRRT” for years to come.