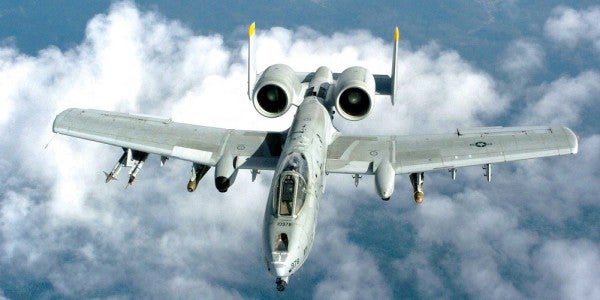 A portion of the Air Force’s A-10 Thunderbolt II squadrons may end up grounded over the next few years due to desperately-needed wing replacements, with some of the aircraft stuck on the tarmac as early as fiscal year 2018, the head of Air Force Material Command announced on Sept. 20.

According to a Sept. 21 Defense News report, Pawlikowski stated that a portion of the service's Warthog fleet could be grounded by fiscal year 2018.

“Our current grounding projections show first groundings in FY18 with approximately 55 aircraft by FY25,” Mike Walton a spokesperson Air Force Materiel Command told Task & Purpose. “There are many factors which could change the projections. We continue to pursue various mitigations to move groundings to the right and reduce the total number of groundings across the fleet.”

Currently, 109 of the service’s 281 A-10s need replacements to extend their wing set’s lifespan to 16,000 flight hours. And unless new funds are made available by Congress to cover the replacement costs, the service may end up putting some of its of Warthog squadrons out to pasture.

Though lawmakers have blocked attempts to retire the A-10, a decade of continuing resolutions has left the Air Force unable to make long term plans to keep all of it’s Warthogs flying. And although congressional armed services committees did allot for $103 million in their policy bills which would allow the service to restart production of A-10 wings — an estimated cost of roughly $10 million to re-wing a single aircraft — Congress will need to pass a spending bill before the Air Force can actually buy the new wing sets, Defense News reports.

In the meantime, the Air Force may have to turn to its boneyard at Davis-Monthan Air Force Base in Arizona to keep its trusty ground-attack aircraft flying, scavenging wings from mothballed A-10s and refurbishing them. But it’s not an ideal solution, with the wings only providing: “a few more hours,” of flight time, as Pawlikowski said during the conference.

However, laying the blame for the wing-shortage squarely at Congress’s feet recuses the Air Force of responsibility, “While these budget problems were certain factors, she did not mention how the Air Force had consciously cut funding for any major upgrade work or even depot-level maintenance across the A-10 fleet during the 1990s,” writes The War Zone’s Joseph Trevithick. “The service effectively waited right until the last moment in 2007 to begin the rewing process at all, which it had understood would be necessary for some time, issues I have noted many times in the past.”

Even though the A-10 has been in the Air Force’s crosshairs for years to make way for the F-35, it continues to play a significant role in the fight against ISIS. Unlike the F-35 Joint Strike Fighter, the A-10 is solely a ground-attack aircraft, and it’s a mission the Warthog excels at — especially now that close-air-support is a mainstay of U.S. involvement in the fight against the Islamic State. Able to circle over targets for lengthy periods of time before diving at enemy ground troops and vehicles — exposing only a heavily reinforced belly to soak up fire — the A-10 boasts a complement of air-to-ground ordnance, and a massive 30mm gatling gun which spits out rounds at a rate of 3,900 rounds a minute. It’s got one job, but it excels at it.

“It appears the Administration is finally coming to its senses and recognizing the importance of A-10s to our troops’ lives and national security,” said Rep. Martha McSally, a Republican from Arizona, in a Jan. 13 2016 statement about the decision to delay retiring the aircraft. “With A-10s deployed in the Middle East to fight ISIS, in Europe to deter Russian aggression, and along the Korean Peninsula, Administration officials can no longer deny how invaluable these planes are to our arsenal and military capabilities.”