As you roll out of bed and hear the telltale sounds of the pending apocalypse, you grab your bug-out bag... 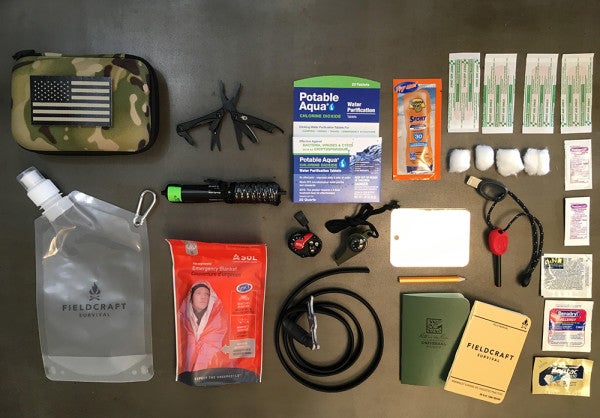 As you roll out of bed and hear the telltale sounds of the pending apocalypse, you grab your bug-out bag and spring into action. Unzipping your bag, you realize with a start that you don’t know how to use any of the shit in there. Or maybe you’re bleeding out from a severe injury and all you’ve got to stop the blood loss are a bunch of Hello Kitty bandaids.

Don’t be that guy. That guy doesn’t survive the apocalypse or much else.

For advice on how to pack a good bug-out bag, Task & Purpose turned to Mike Glover, Army Special Forces veteran and the chief executive officer and co-founder of FieldCraft LLC, which teaches civilians how to survive natural disasters and extreme situations.

Related: A survival expert prepares your family for any disaster »

Given his profession, training, and experience, we asked Glover what you need in your bug-out bag.

For starters, let’s be clear on what a bug-out bag is.

Not to be confused with a survival kit, which contains equipment and supplies for an extended period of time, a bug-out bag — sometimes called a go bag or a blow-out bag — is meant to help you survive the first 72 hours after a natural disaster or crisis situation begins.

“A blow-out bag or a bug-out bag is maintained on your person or close by at all times and has just the essentials to get us out of the catastrophe or disaster at hand and to survive for a period of time,” said Glover.

Typically, you can expect a bug-out bag to last you two or three days, explained Glover, but that ultimately depends on where you are and what equipment you pack.

For example, if you’re in the desert and your bug-out bag has seven liters of water, and the average man drinks five to seven liters a day, you’re not going to last very long, said Glover, who added that after 72 hours without water “you’re going to be in a world of hurt.”

Understanding your environment and how it impacts your survival is one thing.

Knowing what to put in your bug-out bag is another thing entirely.

Glover explained that you need to keep three things in mind when packing your bug-out bag: hydration, warmth, and medical supplies.

“You’ll need the ability to purify water, a space blanket of some sort to maintain body heat, the ability to build a fire and some kind of medical kit,” said Glover, who explained that one of the injuries you should be most concerned with is massive hemorrhaging, or bleeding. That means band-aids won’t cut it.

With that in mind, here’s a good place to start.

So, now that you know what to pack, you need to make sure you know how to use the gear you expect to save your life, and that comes down to preparedness.

Ultimately, survival is less about equipment and more about having the right mindset.

For example, if you’re building a fire on the side of a road with a stick and some rocks instead of walking to the nearest gas station and getting a lighter, then you’re doing it wrong.

“Mindset is the most important element to survival,” explained Glover. “The equipment augments the mindset. Your ability to adapt, your ability to push through situations. … the number one tool in your kitbag is your mindset.”