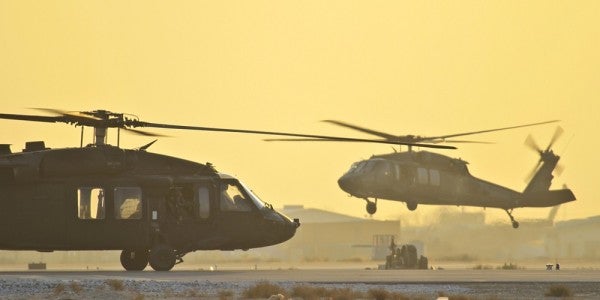 The Afghan Air Force's first-ever UH-60 Black Hawk helicopters have arrived in Kandahar, reports Stars and Stripes, the first of a total of 159 Black Hawks to be supplied to the country’s military by the U.S. as part of an effort to bolster its aging helicopter fleet.

The first two Black Hawks arrived at Kandahar Air Field on Sept. 18 and will be used for training, with two more UH-60s expected to arrive by late October. The full delivery of all 159 aircraft is expected to be completed by 2023

Afghan Mi-17 pilots will begin training on the Black Hawks as early as next month, in both Kandahar and at Fort Rucker in Alabama. The training could take just three months, based on Department of Defense estimates cited by Stars and Stripes.

Afghanistan’s military, much like the U.S.-led coalition, leans heavily on airpower, but the state of its helicopter fleet has proven problematic. Some 18 of its 46 Mi-17s were completely unusable, according to an Special Inspector General For Afghanistan Reconstruction (SIGAR) report published in April. Due to a lack of parts and old airframes, Afghanistan’s existing Mi-17 helicopter fleet is expected to become “unsustainable” by the mid-2018, according to Stars and Stripes.

To combat this, the Pentagon requested funds from Congress in November to retrofit older Black Hawks to replace the Mi-17s. The Soviet-era Mi-17 fleet is the workhorse of the Afghan Air Force, running roughly half of all its sorties, reports Reuters.

Though Afghanistan’s existing Mi-17 fleet is facing a severe readiness issue, it’s presumptuous to assume the same problems can’t, or won’t befall the UH-60, because they have. As Task & Purpose’s Jared Keller reported Sept. 7:

… Black Hawk variants in August 2017 alone experienced separate aviation mishaps in Afghanistan’s Nangarhar province, off the coast of Hawaii, and off the coast of Yemen. Despite worries about a pilot shortage and experience deficit detailed in a Pentagon Inspector General audit of Black Hawk training and airframe evaluations released in July, the DoD emphasized that Army Aviation and Missile Command “did not effectively manage airframe condition evaluations for the UH-60 fleet,” so far that 25% of the branch’s 2,098 Black Hawks skipped mandatory safety inspections between March 2016 and February 2017.

There are some who argue that the switch — from the tried and battle-tested Mi17s, popular among their Afghan pilots, to the Black Hawk, the American military’s workhorse — is driven by politics, and that it comes at a tenuous time.

The U.S. military bought the Mi-17s for the Afghan military to expedite the growth of its air force, but in 2013, the Pentagon halted the purchase of $1 billion in new Mi-17s, reports Stars and Stripes. And the pressure continued the next year with then-President Barack Obama issuing a restriction on business with Russian arms makers.

The plan to replace the aging fleet of Russian helos dates back to 2016, but there are concerns that the procurement and necessary training won’t come to fruition in time to be of significant help to Afghan forces stymied by a resurgent Taliban, and nascent threats from other jihadist groups in Afghanistan.