There are a lot of ways to stop a bullet. Feet of concrete work. A few dozen pounds of steel... 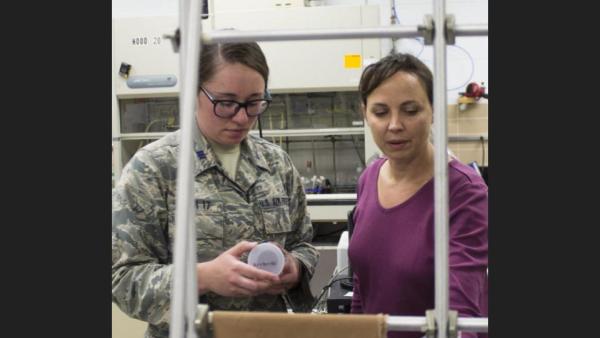 There are a lot of ways to stop a bullet. Feet of concrete work. A few dozen pounds of steel work, too. Modern fibers like Kevlar work, if you have enough.

But a senior cadet at the Air Force Academy may have come up with something better: A thin coating of gravy.

It's a special gravy, to be sure. But it's not that different from the cornstarch-thickened substance best served over breakfast biscuits.

And it would stop Dirty Harry's .44 caliber magnum as a snack.

Yet it's flexible enough to bullet-proof, ahem, intimate areas.

“Like Under Armour, for real,” explained cadet Hayley Weir, a Highlands Ranch native who has applied for a patent on her spicy recipe.

Weir, who graduates from the academy this month, is an academy chemistry department dropout who came up with the idea in class.

A professor had asked cadets to think up ways to stop a pistol bullet. She thought of a child's toy called Oobleck, which has a really scientific second name: a non-Newtonian fluid.

Those fluids, made with substances like cornstarch, are gooey and oozy to a gentle touch, but become as hard as steel when struck.

That means when a object traveling with a lot of force strikes the goo, it runs into something like Superman's chest.

Weir has a collection of mushroom-shaped spent bullets to prove it.

Burke's Marine Corps experience told him that Weir had stumbled on to something important.

“It's going to make a difference for Marines in the field,” he said.

In an academy lab, Weir mixes up batches of her secret formula, a viscous black goo. She says it's less like science and more like baking a cake.

“I use a KitchenAid mixer,” she explained.

The substance is put in vacuum-seal bags normally used for leftovers and flattened into an quarter-inch layer.

That is layered into a wafer with Kevlar fabric.

“It's all about the layering,” Weir said.

The result was first tested on a gun range in Jack's Valley, the training area on the northern edge of the 18,500-acre academy campus.

Weir and Burke hit the armor with shot after shot of 9 mm fire. The goo stopped the bullets.

A firearms instructor offered up a .44-caliber pistol round for a tougher test. The .44 magnum bullet, legendary in firearms circles, has been used to successfully hunt elephants.

Despite the increased weight of the bullet and its higher velocity, the gooey armor worked better.

What happened is part of the magic of gravy: When impacted the molecules in the gooey substance jam together. The bigger the impact, the bigger the molecular traffic jam and the better the ability to resist penetration.

That means that Weir's goo has the potential to replace steel plate as armor.

“It's the properties of non-Newtonian fluids that do this,” she said.

Having a cadet come up with ground-breaking ideas is nothing new at the academy, which prides itself on having the best undergraduate research programs on the planet. Cadets have designed satellites and airplanes. They've also worked on making diesel fuel from algae, tiny hydrogen fuel cells and new molecules that could clean up chemical weapons.

Weir's experiments have captured the imaginations of some of the Air Force's top scientists.

Weir and Burke recently traveled to the Air Force Civil Engineer Center in Florida to demonstrate their invention. It worked as well there as it had at the academy.

The center took to its website to laud the invention, calling it “incredible.”

“We're very pleased,” Dr. Jeff Owens, senior research chemist, said in a statment. “We now understand more about what the important variables are, so now we're going to go back and pick all the variables apart, optimize each one and see if we can get up to a higher level of protection.”

The flexibility of Weirs weird armor has researchers thinking big.

Wafering the stuff into fabric could lead to tents resistant to mortar and artillery fire.

Weaving it into a blanket could giver firefighters and cops protection when they work to pull people out of mass-shooting scenes.

On the battlefield, it could drive body army that actually protects the entire body – rather than the torso protection now given to troops overseas.

Weir is hoping to continue her research after graduation this month. She hopes her gravy saves lives.

But her invention hasn't gone to her head.

“I don't feel like I am that much smarter than the average person,” she said,