One of the options that the United States is looking at to counter North Korea’s nuclear-tipped ballistic missiles is an experimental weapon... 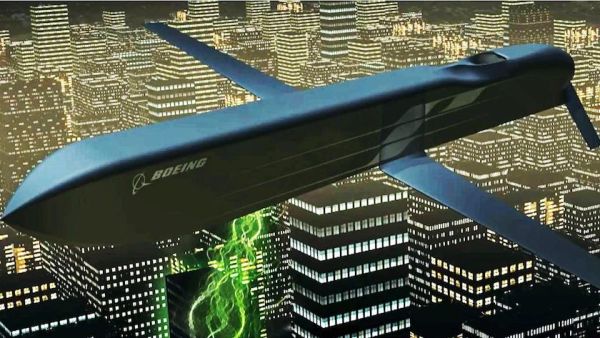 One of the options that the United States is looking at to counter North Korea’s nuclear-tipped ballistic missiles is an experimental weapon called CHAMP.

CHAMP stands for Counter-electronics High-powered Microwave Advanced Missile Project (CHAMP). It uses bursts of microwave energy —an electromagnetic pulse (EMP)—to disable electronic systems. The idea would be to launch a cruise missile such as an AGM-86C—which is carried by the Boeing B-52—that is armed with a CHAMP warhead to disable Pyongyang’s nuclear forces. The weapons would have to fly exceedingly close to the North Korean missiles, but the Air Force believes that it could work.

CHAMP is not yet ready for operational deployment—”it would take a little bit of time”—as Robinson said. But Air Force officials believe the weapon could be readied for a contingency operation within only a few days in an emergency. And indeed, the Air Force has tested the weapon against simulated facilities that produce weapons of mass destruction.

“It absolutely did exactly what we thought it was going to do,” Robinson told NBC. “We had several different target classes in those facilities, and we predicted with almost 100 percent accuracy … which systems were going to be affected, which systems failed, and how.”

While there have been suggestions that the United States could use weapons like CHAMP in an attempt to strike North Korea’s missile, a fundamental problem remains.

“They won’t have the slightest idea that we used HPM [High-Powered Microwave] bombs,” Jeffrey Lewis, Director of the East Asia Nonproliferation Program at the James Martin Center for Nonproliferation Studies at the Middlebury Institute of International Studies at Monterey, told The National Interest. “They will see cruise missiles fly into the country and hear explosions. By the time they figure out they were less lethal HPM payloads, they will have already retaliated.”

Kingston Reif, director for disarmament and threat reduction policy at the Arms Control Association, told The National Interest that he agreed with Lewis. “Because this weapon wouldn't go boom in the same way a more kinetic option would, some might think that using it wouldn't provoke a response from North Korea. But I think that's wishful thinking,” Reif said. “If North Korea can detect the missile, it's likely they will try shoot it down or respond as if it were a kinetic attack. North Korea won't know if/when it detects the missiles whether they are carrying CHAMP as opposed to a conventional or nuclear warhead.”

Moreover, given that once the trigger is pulled—so to speak—that it would be essential to eliminate all of North Korea’s nuclear weapons in one fell swoop, a non-lethal weapon would not be the ideal tool for the job. “I am sure North Korea won’t care if its CHAMP or conventional or nuclear counterforce,” missile expert Vipin Narang, an associate professor of political science at the Massachusetts Institute of Technology told The National Interest. “Counterforce is counterforce. And all of it can put North Korea in a use it or lose it position. So if we want to do counterforce, I would say don’t mess around and just do it right: whatever maximizes your chance of getting as many systems as one can get, and that’s not CHAMP.”

Effectively, that means that the United States would have to launch either a nuclear or conventional strike. “If we're at the point where we think we need to prevent a missile from getting off the ground, unless we're 100 percent certain in CHAMPs efficacy, it would seem to me the military would the greater certainty that would come from a more kinetic option,” Reif said.

Narang noted that nuclear options could be considered along with any conventional strike option. However, just about any conventional option is probably likely going to be more effective than a HPM. “Why wouldn’t you just use conventional explosives? CHAMPS is an HPM-armed cruise missile,” Lewis asked. “If you know the location of a missile about to launch, or a nuclear site, and you are going to hit it with a cruise missile, it makes far more sense to use a conventional explosion. What is the upside of using a munition that is less likely to damage it and that may damage it in a way that we can’t see? Think about a missile. I don’t want to just fry the missile’s electronics. I want to kill the missile, the transporter, and the personnel in the military unit launching it. If I have to kill a Hwasong-15 with a JASSM-ER, it ain’t going to be with an HPM.”

Moreover, while the Air Force says that the CHAMP works, it also admits that it needs to get extremely close to the target to be effective. There is also the very real possibility that North Korean nuclear facilities are hardened against an EMP just like American, Soviet and Chinese systems are. As Reif notes, there is “some uncertainty regarding the weapon's effectiveness given steps North Korea could take to shield equipment and communications to mitigate the damage something like CHAMP could do.”

Theoretically, the CHAMP could do exact what the Air Force claims—but there are a lot of unknowns. “In theory, high-powered microwaves will damage electronics, but I am not sure we really know how much power is necessary to disable specific systems that may be complex and hardened?” Lewis noted. “Without knowing the finer details of the electronics in a North Korean target, it might be quite difficult to have confidence that CHAMPS will make a difference.”

In the end, the United States is probably not seriously considering using the CHAMP to strike North Korea’s missiles. “I think there are uses for a weapon like CHAMP beyond trying to take out a North Korean missile,” Reif said. “But we shouldn't kid ourselves that there is some kind of technological silver bullet that will solve our North Korea problem.”

Indeed, this entire episode could be about securing funding for the CHAMP program. “I think we’re seeing a clever pitch for funding, that’s all,” Joshua H. Pollack, editor of The Nonproliferation Review and a senior research associate at the James Martin Center for Nonproliferation Studies, told The National Interest. Pollack could very well be right—time will tell.