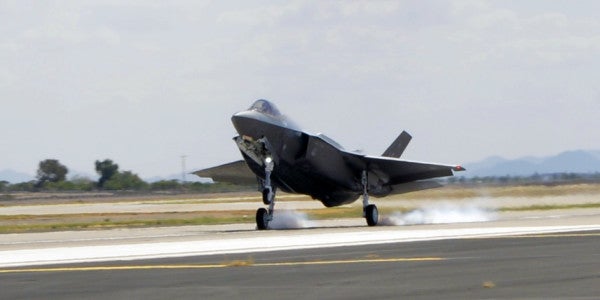 The Air Force has extended its stand-down of F-35s at Luke Air Force Base in Arizona to determine what has caused a string of oxygen system failures in its newest fighter jet.

“The 56th Fighter Wing will continue their pause in local F-35A flying to coordinate analysis and communication between pilots, maintainers, medical professionals and a team of military and industry experts,” Luke Air Force Base spokesman Maj. Rebecca Heyse said in a prepared statement

Since May 2, five pilots at the base have reported experiencing incidents of hypoxia – when a person doesn’t get enough oxygen to his or her tissues — while flying F-35s at Luke Air Force Base. On Friday, the Air Force announced flights would stop for one day to examine the inci-dents. On Monday, the stand-down was extended indefinitely, Heyse said.

“The safety of our airmen is paramount and we will take as much time as necessary to ensure their safety,” Heyse said in the statement.

In separate incidents, pilots reported failures in the oxygen systems on some F-35s. The sys-tems produce and regulate air that pilots breathe while flying, so they maintain enough oxygen in their bloodstream to function. When the system fails, a pilot is at risk of disorientation, loss of consciousness or possibly death. In each of the five incidents at Luke, the pilots were able to initiate a backup oxygen system in time.

The F-35 stand-down follows a similar situation with the Navy T-45 Goshawk trainer jets, after a series of oxygen system failures were reported in some those aircraft. The T-45 stand-down started in April and has lasted more than two months. So far, none of the student pilots who would be flying the T-45 at one of the Navy’s three training bases have returned to using the aircraft, the service said last week.

Oxygen system failures similarly grounded the Air Force F-22 Raptor fighter jets in 2011. In 2013, the Department of Defense inspector general issued a critical report of an Air Force in-vestigation into the system’s potential role in the F-22 crash on Nov. 16, 2010 that killed pilot Capt. Jeff Haney.

In the accident investigation, the Air Force had noted Haney had probably experienced “a sense similar to suffocation when airflow to the oxygen mask stopped.” But the Air Force’s conclu-sions found Haney still to be at fault for the crash.

At the time, the inspector general found the Air Force’s conclusions “not to be supported by the facts.” The pilot’s family settled a wrongful death lawsuit with Lockheed Martin and Boeing, the aircraft’s primary contractors.

“It’s kind of baffling, because this is a very basic function of an aircraft,” he said.