Just over a month since Las Vegas was rocked by the deadliest mass shooting in modern U.S. history, the Air … Continued 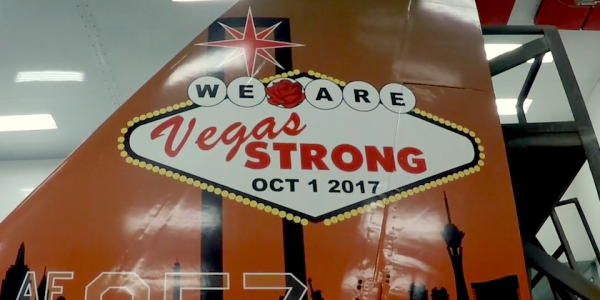 Just over a month since Las Vegas was rocked by the deadliest mass shooting in modern U.S. history, the Air Force — a service with deep roots in the area — has unveiled a unique tribute to honor the victims of the Oct. 1 attack: a custom painted F-15A Eagle.

Initially set aside to celebrate the 70th birthday of the Air Force in September, the fighter jet got a new mission, decided upon by the airmen at nearby Nellis Air Force Base shortly after Stephen Paddock opened fire on a country music festival from the Mandalay Bay Hotel and Casino last month, killing 58 people and wounding another 546.

The base unveiled the new paint job in a brief time-lapse video published on Nov. 2. The F-15A will appear at the 2017 Aviation Nation Airshow at Nellis on Nov. 11 and 12.

The aircraft appears in the video with a coat of the Air Force’s traditional grey tactical color with orange detailing on the undersides of its flaps and horizontal stabilizers. Along the left fuselage, “Vegas Strong” is spelled out in clear, piercing white beneath the left wing reads; “U.S. Air Force” runs along the right side. And a silhouette of the Las Vegas skyline and the iconic “Welcome to Fabulous Las Vegas” sign are emblazoned across the vertical stabilizers; the traditional welcome language has been replaced with “We Are Vegas Strong.”

“It really makes us a lot prouder of the work we've been asked to do,” Senior Airman Brittany Galloway told local ABC News affiliate KTNV-TV on Nov. 6. “We wanted to bring about something that would bring us together to the community.”