At the beginning of August, the Air Force slapped Boeing with a hefty contract for two 747-8 commercial jets to... 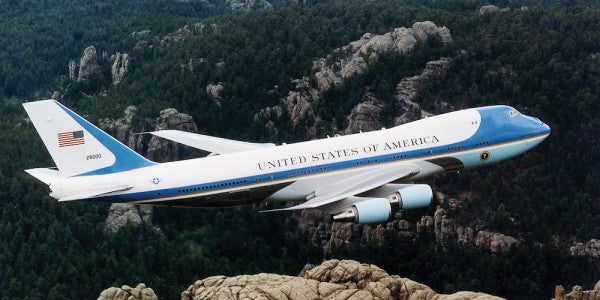 At the beginning of August, the Air Force slapped Boeing with a hefty contract for two 747-8 commercial jets to replace the decaying VC-25A aircraft that currently serve as the Air Force One fleet during President Donald Trump’s frequent jaunts around the world. While the contract couldn't come a moment sooner for the aging Reagan-era aircraft rife with technical glitches, then-president-elect Trump had previously pushed to cancel the $4 billion modernization plan to save the federal government money. “Costs are out of control,” Trump tweeted in December 2016. “Cancel order!”

Trump wasn’t totally wrong: The modernization effort was projected to cost $2.87 billion through 2021. Luckily, the Air Force Life Cycle Management Center’s President Aircraft Recapitalization Directorate at Wright-Patterson Air Force Base has been working overtime since Trump’s inauguration to control replacement costs under Air Force Maj. Gen. Duke Richardson, who was promoted in March to add “a new level of scrutiny” to the project, as Aviation Week reported. The Air Force eventually settled on a pair of 747s originally ordered by now-defunct Russian airline Transaero in 2013 (The branch wouldn’t disclose the final terms of the contract).

But the secret to cost control, according to Air Force officials? One dude’s “pretty sweet beard.”

You cannot make this up. On Aug. 24, Wright-Patterson AFB published a press release (first flagged by Defense New reporter Valerie Insinna on Twitter) praising the “countless hours and out-of-the box thinking” of James Patterson, the contracting officer who led his contracts team in a seven-month-long negotiation process with Boeing. This innovative thinking included a vow by Patterson to “not shave his beard until the contract was signed.”

“We realized early in the process that this was taking longer than we thought, and I decided I could probably grow a pretty sweet beard in that amount of time,” Patterson said in the release. “We began to treat it as a team incentive and a way to mark the progress of the aircraft purchase. People would pass me in the hall and instead of asking ‘are we there yet?’ they’d say, ‘oh are you going to shave the beard this week?’

Wow, this @WrightPattAFB news release on Air Force One went in an really unexpected direction… pic.twitter.com/3DugTNCQBr

After finalizing the contract with Boeing, Richardson presided over a “shaving ceremony” alongside Patterson’s wife. And while public affairs officials at Wright-Patterson AFB declined to comment on the release when reached by Task & Purpose, Defense News’ Insinna managed to snag a photo of Patterson with his fabled beard just moments before his shearing.

Here's the contracting officer with his fabled beard before the cutting.

Can we make this standard procedure for all acquisition programs? pic.twitter.com/TDmciPtcxf

Perhaps the Air Force will take Insinna’s suggestion seriously and inject some beard-related incentives into its acquisitions and contracts processes. After all, the Army announced back in May it was finally considering major changes to its beard policy. This is America — anything is possible.