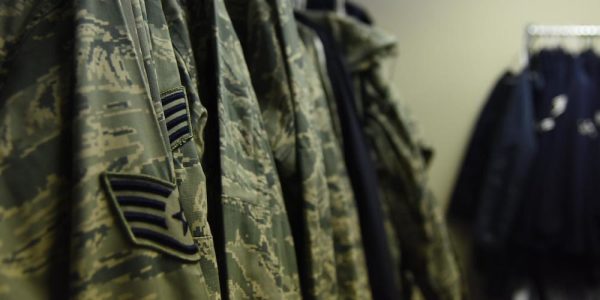 The U.S. Air Force's proposed switch to an Army-patterned uniform may be on the fast track, according to a recent Facebook presentation — and it could be a pricey proposal for the service.

The Army Combat Uniform, or ACU, may become the Air Force's permanent replacement for the current Airman Battle Uniform as early as June 1, according to a recently leaked slide presentation.

According to the presentation, titled “ABU to ACU-OCP Transition Decision” posted on the Facebook page Air Force Amn/Nco/Snco, the service is awaiting a decision from Air Force Chief of Staff Gen. David Goldfein.

The presentation gives options for 24-, 36- or 48-month transition periods for all airmen to move from the ABU to ACU, which incorporates the Army's Operational Camouflage Pattern, or OCP.

Should the service choose the fastest timeline, it would cost roughly $450 million to get airmen switched to the ACU within 24 months if the start date begins Oct. 1, one slide shows.

If the Air Force pushes the decision to next year, the minimum it would spend would be $125 million for a 48-month transition, with all airmen receiving new uniforms by 2024.

Amn/Nco/Snco is popular within the Air Force, but isn't officially run by the service.

“We regularly review uniform policy and gather feedback from Airmen via a number of channels. One recommendation has been the movement from ABUs to ACUs,” she said.

Atanasoff could not say from where the leaked slide presentation originated.

“The Air Force uniform policy team and senior leaders are currently considering this feedback and working on possible courses of action,” she said.

Switching uniforms presents obstacles ranging from building adequate stockpiles of boots, accessories and appropriate equipment, to arranging a buyback or uniform disposal program for the ABU, the slides show.

Goldfein, alongside Chief Master Sgt. Kaleth O. Wright, in October told airmen during an all-hands briefing at Kirtland Air Force Base, New Mexico, that a number of uniform changes may be coming.

“We're looking at it. Here's the deal. Let's all agree to agree on a few things. Number one, uniforms matter. They matter to all of us,” Goldfein said during his trip to the base. “We want to feel good … want them to be functional.

“If you want to know what drives my decision-making going forward, it's about lethality and readiness; the business of warfighting,” he said.

Goldfein added, “What is the battlefield uniform we need to perform that function. And if it's OCPs, and that's what we get to, then that's the decision we'll make.

“But I'm not racing at it because I want to get it right. Because once you make this decision, you better be ready for this decision to be in our Air Force for the next 20 years. So we're spending a lot of time looking at it. We're going to take our time to get it right,” he said.

Goldfein's comments came one month after the Air Force confirmed that airmen flying cargo airlift or helicopters — anything aside from a fighter and without an ejection seat — had been seen wearing the Army Aircrew Combat Uniform, known as the A2CU, more often.

“The two-piece [A2CU] uniform has OCP-patterned fabric and the same fire-retardant properties as the flight suit, making it certified for wear by pilots flying aircraft without ejection seats,” Atanasoff said at the time.

“Since the pattern matches the OCP, it is often the uniform for downrange locations where many aircrews are operating,” she added.

The A2CU has also been in use stateside, Air Force officials said.

The cost of frequent military uniform changes has frustrated lawmakers in the past. In 2016, the Senate included a provision in its version of the next year’s defense budget that would have required the Defense Department to notify Capitol Hill before developing or fielding any new camouflage utilities. Some Army camouflage uniforms have cost billions to develop, while other services have spent millions on patterns that ultimately flopped.

Airmen have criticized the ABU — first issued to new recruits in 2007 — because they are required to add it to their wardrobe but don't utilize it as much as other uniforms, many say.

The change would be the first major uniform switch-up since then. In 2012, Chief of Staff Gen. Mark Welsh mandated an exception to “Blues Mondays,” which gave commanders at bases the choice to have their airmen wear dress blues at the start of the work week.