The American arm of legendary Kalashnikov Concern, the weapons manufacturer behind the ubiquitous AK-47 assault rifle, announced on May 17... 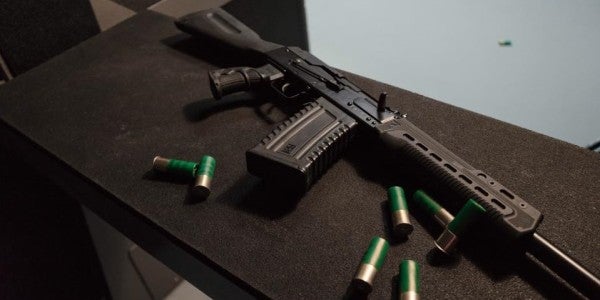 The American arm of legendary Kalashnikov Concern, the weapons manufacturer behind the ubiquitous AK-47 assault rifle, announced on May 17 that its new AK-style shotgun has already started shipping to dealers in the states, according to Guns.com.

Dubbed the KS-12 and KS-12T, the new AK-style firearms from Kalashnikov USA are advertised as 12-gauge, semi-automatic tactical shotguns with barrels ranging between 16 and 18 inches in length. The new shotgun features a collapsible stock, handguard, Picatinny rails, and a 10-round mag — plus a bit of a price tag at $1,000.

But details on the new shotgun are oddly scant: More comprehensive specs and listings of which sellers currently have it in stock are not available on the company website, notes The Firearm Blog. But that hasn’t kept the stateside Kalashnikov maker from congratulating itself on its newest shottie.

Related: The Company Behind The AK-47 Just Dropped A Badass New Pump-Action Rifle »

“We have finally reached the point of being more than satisfied with the remarkable quality and reliability of these products,” Kalashnikov USA CEO Brian Skinner announced in a press release. “These firearms are truly worthy of the Kalashnikov name. We are extremely proud to introduce these to the market, and are confident of their success in the AK arena.”

Kalashnikov USA is a relatively new entrant to the American firearms market. The company split from parent, Kalashnikov Concern, as a workaround to avoid U.S. sanctions levied against Russia in response to the 2014 invasion and annexation of Crimea. But now, AK fans in the states are reaping the benefits. The new AK-style shotguns cement the company's switch from an importer of Kalashnikovs to a U.S.-based manufacturer.

And the company isn’t done unveiling new goodies for American shooters: This summer, the company will unveil its KR-9mm platform, a suite which will include a 9mm pistol, as well as a carbine and a rifle, notes Guns.com. We can’t wait.