Ammo Is Expensive. Here’s How To Make Your Own

Ammunition can be expensive. Reloading bullets can help save you loads of money, if you can take on the often... 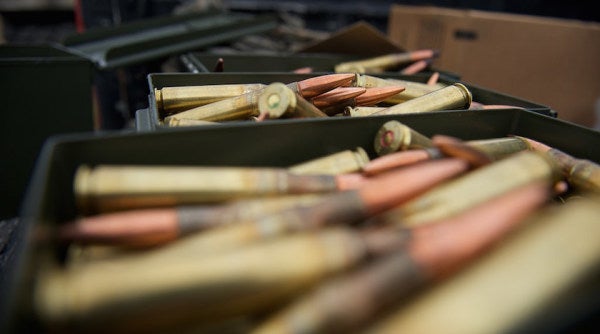 Ammunition can be expensive. Reloading bullets can help save you loads of money, if you can take on the often time-consuming task. Many shooters would argue that learning to make your own ammo is worth the labor. What’s more, loading your own ammunition can even make your shots more accurate. So whether you’re hoping to save money, shoot straighter, or both, learning to load your own ammo may be the way to go.

Jim Finnerty, who has more than 30 years of experience and teaches a National Rifle Association-accredited course on how to reload ammo, sat down with Task & Purpose to explain exactly what you’ll need to make your own ammunition.

The process, he says, “will work for any kind of ammunition — rifle or pistol.”

The overall process is not quite so simple as this list suggests, but these four steps are the basics. Finnerty advises that anyone who is serious about making their own ammo should buy a manual and take an accredited course.

It’s important to note that ammo itself consists of four parts: the cartridge, the primer, the powder, and the bullet — all of which you need to reload.

“A lot of the stuff is available online,” Finnerty says.

These items can add up to a fairly expensive bill; however, Finnerty says, “Don’t buy the cheapest equipment, because you’ll end up getting frustrated, because it doesn’t work as well.”

In order to reload ammo, you will need to round up used cartridges. “It starts by picking up your set brass when you’re done firing your factory ammunition,” Finnerty says. “And you take that brass home and you clean it. That brass case is the most expensive part of the ammunition, so by reusing it, you end up saving a lot of money.”

Cleaning the cartridge is where the tumbler comes into play, and once it’s been cleaned and inspected, you can move on to the next step.

Step 3: Reload the press and dies.

“Once you’ve fired it, that case has been expanded inside of the firearm chamber, so it’s larger than factory-sized,” Finnerty says.

Now that you’ve cleaned and inspected it, “You put it in a reloading press, and you put a reloading die in the press. And the resizing die squeezes that case back down to the factory specifications,” he adds.

“All you need to do to reload the ammo is to put in the new primer, you load in some pressure powder, and you use another die, called the seeding die, to seed the new bullet on top of it, and then it’s ready to go,” Finnerty says.

As far as safety, he adds, “it’s a misconception that it’s a dangerous pursuit” because of the explosive elements found in the primer and the powder.

“In reality, if you’re careful, there’s no danger at all, especially during the reloading process,” he says.

And if you do it right, you really can save a lot of money.