The Army Is Testing Its Replacement For The Beloved Hellfire Missile, And Soldiers Already Like What They See 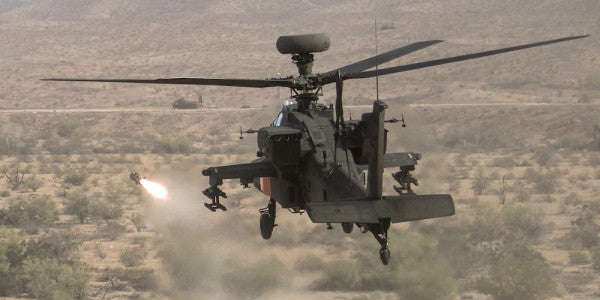 Army aviators have been putting the new Joint Air-to-Ground Missile through its paces as the program works its way to its next milestone, a low-rate initial production decision.

The JAGM is meant to provide the precision standoff-strike capability to target high-value fixed and moving targets, both armored and unarmored, even in poor weather conditions. It will replace several air-launched missiles, including the AGM-114 Hellfire, which has seen extensive use in the campaign against ISIS in Iraq and Syria.

The versatility and simplicity of the new missile won high marks from pilots testing it.

“Before, we had to put a lot of thought into, 'What do I need?' As soon as I launch, I don't get to come back and change out my missiles,” said Chief Warrant Officer 5 John Bilton, the first nonexperimental test pilot to fire the missile late last year. “In combat, you don't want to encounter a target you need to hit and not have on-board the right missile for the job.”

The JAGM combines semi-active laser guidance, like that used on the Hellfire II, and millimeter-wave radar, like that used by the Longbow Hellfire, into a single system. Paired with a Hellfire Romeo warhead, motor, and flight-control system, the new missile is designed to hit vehicles and personnel in the open. A programmable delay feature allows it penetrate buildings or vehicles before detonating.

The JAGM is an Army program, but it has joint requirements for the Navy and Marine Corps. Lockheed Martin won the engineering and manufacturing development contract in summer 2015. Army and Marine Corps attack helicopters will be the first to see it, though it could eventually make its way on to any aircraft that fires Hellfires, such as unmanned vehicles like the MQ-9 Reaper drone.

In addition to allowing the aircrew to fire from outside the range of defense systems, the new missile is designed to protect them with a terminal-guidance capability, which allows the aircraft to leave the area after firing. The aircrew can switch the missile's guidance between the semi-active laser or a radio frequency within seconds.

“Using a SAL missile, the last six seconds of the missile flight is the most critical to keep your laser sight on target,” said Michael Kennedy, an experimental test pilot with the Aviation Flight Test Directorate at Redstone Test Center.

“If you're getting shot at and your line of sight goes off the target, your missile misses,” Kennedy added. “JAGM can start off using the laser, then transition to the radar portion and still hit the target if the crew has to use evasive maneuvers.”

“The ability to not have to put the laser directly on the target and let the adversary know that you are about to kill him is a tremendous benefit,” said Al Maes, an aviation weapons technical adviser for the Training and Doctrine Command's Capability Manager Recon Attack.

“Once you have the missile off the rail and encounter smoke or dust or fog, a regular laser missile could lose that target,” Maes said in an Army release. “With JAGM, I have a pretty good guarantee that I am going to kill that target with a single missile instead of multiple missile shots.”

Overall, as of September 2017, the Army had done two successful ground launches and 20 successful test launches from an Apache, according to a January report from the Pentagon's Director of Operational Test and Evaluation, which covered fiscal year 2017.

Eighteen of those 20 air-launch tests hit their intended targets under test conditions. Four of those launches included a live warhead — one of which failed to detonate. The DOT&E report says that failure analysis is currently underway to find the root cause.

The report also said testing showed that Apache targeting systems “occasionally generate erroneous target velocities that are passed to the missile without cueing the gunner of the errors.” Initial cybersecurity testing on the missile found what the DOT&E report called a Category 1 vulnerability: “A trained and knowledgeable cyber analyst could gain access to the missile-guidance software.”

The JAGM program plans to test-fire 48 more missiles to support its Milestone C goal in fiscal year 2019, which begins in October 2018. Operational tests are complete, but developmental testing, including new software to support the JAGM's use on the Apache, will continue at Yuma Proving Ground in Arizona.