The Army Research Laboratory is exploring a number of new autonomous vehicle, but none are quite as silly — or … Continued 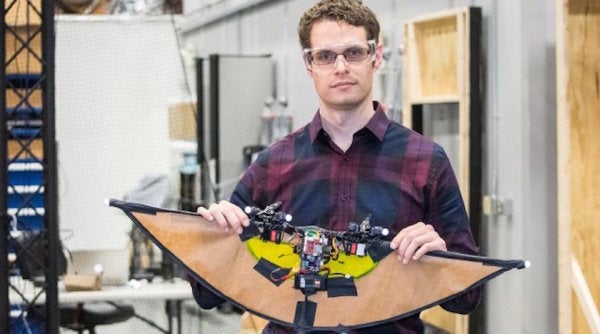 The Army Research Laboratory is exploring a number of new autonomous vehicle, but none are quite as silly — or as potentially useful — as this new drone modeled after a flying squirrel. Why? You may ask. Because it can transform mid-flight.

Unlike other drones, this one will be able to land itself, conserve power, and gather intel. It will also be intelligent enough to detect walls, avoid obstacles and rapidly learn its environment.

Weighing in at half a pound, this drone focuses on one thing: weight. Normally, “to get this type of vehicle, you take a quadrotor and basically staple it to a fixed-wing aircraft,” according to Dr. Steve Nogar, a researcher with the Army Research Laboratory. “But it’s not very efficient.”

His model, the flying squirrel, helps to cut down on that weight and explores a drone’s ability to transform in mid-flight. “[It] tilts its rotors to go from hovering like a helicopter to speeding along like a sleek airplane,” according to an Army release.

This particular drone joins the ranks of a number of autonomous craft meant to modeled after animals. The Navy introduced a drone called the GhostSwimmer, which looks exactly like a bluefin tuna and performs reconnaissance missions at depths of up to 300 feet. And DARPA produced the Nano Air Vehicle, which mimics a hummingbird and scouts battlefields.

“Looking forward, we want to look at perching or landing on something in the environment,” Nogar said. “That means we have to be able to sense the environment.”

In addition to designing more efficient flying capabilities, Nogar is focused on the aircraft’s intelligence.

“If you're going to land on something, you need to know very quickly how fast that's coming up to you as you come in to land,” Nogar said. “We will need to enable the UAV to sense and perceive its environment using visual techniques such as machine learning.”

This whole project sounds ridiculous, but it’s oddly perfect. After all, Rocky was a flying squirrel, and he and Bullwinkle were instrumental in foiling the spies of Soviet satellite nations in the 1950s. This seems like a logical 21st century solution.