While it may seem like the U.S. Army’s latest take on the dune buggy looks like a vehicle ripped from... 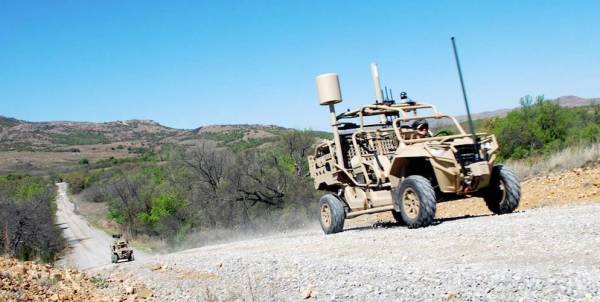 While it may seem like the U.S. Army’s latest take on the dune buggy looks like a vehicle ripped from a scene from “Mad Max: Fury Road,” don’t be fooled: Military strategists hope that a new type of specialized fast attack vehicles will give combat troops the edge they need to counter all manner of new threats.

The Army showed off a pair of specialized buggies, dubbed “Hunter” and “Killer” during the 2017 Maneuver Fires Integrated Experiment at Fort Sill, Oklahoma, last week. The two vehicles were both designed to “track aircraft, perform three-dimensional fires targeting and provide other capabilities,” according to the Army, assisting advancing ground forces in gathering forward intelligence and tracking inbound aircraft.

Screens show what Soldiers will see when using the Hunter or Killer vehicles during the Maneuver Fires Integrated Experiment, April 3, at Fort Sill. A touch-screen monitor will allow Soldiers to request precision fires on targets.Jared Keller

But these versatile little buggies are far more than just glorified scouts, according to the Army’s Aviation and Missile Research Development and Engineering Center. But Army engineers have some fascinating specialized functions in mind for the two (emphasis ours):

For land, the Hunter platform could call precision fires in an automated fashion, and for air Soldiers could use the platform to communicate with an aircraft for support. When performing for maritime, a forward observer could call for an attack from a ship to a target.

The Killer platform adds the ability to fight in the cyber and space domains. A Soldier could request a cyber call to disrupt communications between a UAV and its operator. Soldiers would also be able to call on space-based capabilities.

Cyber domains? Space-based capabilities? All on this little buggy? The War Zone nicely sums up the operational intent of the Hunter and Killer: The Army is looking for a forward weapons platform that can call in cyber and space strikes like artillery fire:

… [T]here are concerns that cyber warfare in future military operations could include spoofing GPS signals or otherwise disrupting satellites. Russian forces and their allies in Syria and Ukraine have actively employed electronic warfare systems, which could include these capabilities.

It seems more likely that Killer has similar gear that can find various signals and then jam or intercept those transmissions, or other intelligence gathering capabilities, rather than some sort of Hollywood-esque mobile hacking arrangement. Army military intelligence “cyber soldiers” have already experimented with using similar skills in various exercises.

Indeed, the Hunter and Killer prototypes come during a major ramp-up of Pentagon cyber operations. More specifically, their demonstration came amid a major push by all branches of the military for technological countermeasures to address the increasing use of unmanned aerial vehicles by terror groups like ISIS in Iraq and Syria; at MFIX, the Army showed off a Stryker Infantry Carrier Vehicle prototype outfitted with a five-kilowatt laser cannon that literally blasted drones out of the sky in front of a mesmerized audience.

The Hunter and Killer buggies on the move during MFIX on April 3 at Fort Sill.Photo via DoD

It’s important to note how new these systems are: The Hunter and Killer iterations were little more than illustrations as recently as August 2016. “This is just the first stage of the experiment and it's also the first stage of the counter-UAV,” Scott Patton, science and technology strategist for AMRDEC, said in a statement. “We also want to give the soldier options based on .

Still, Army engineers hope to deploy the Hunter and Killer buggies (or their technological cousins) downrange as soon as 2018 — and, in time, without much support from specialists regardless of the circumstances of the conflict.

“What happens in one theater will be different in another theater, and the rules of engagement may be different,” said Patton. “We want to be able to plug those ROEs in — what they can do, what they can automate — and then put the human in the loop when necessary. That's the objective. We're not there yet.”