Army To Gunmakers: Show Us A New 7.62mm Service Rifle 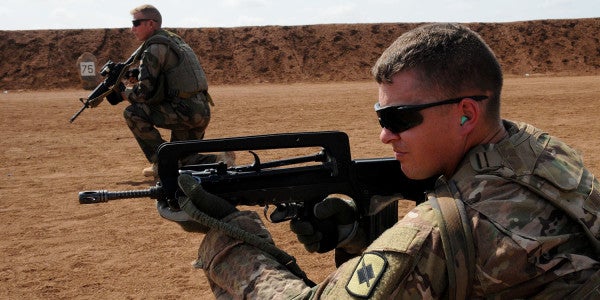 U.S. Army weapons officials have launched a survey to see what gunmakers can offer for an off-the-shelf 7.62mm Interim Combat Service Rifle.

The May 31 request for information, known in acquisition parlance as an RFI, on behalf of Product Manager Individual Weapons, is an attempt to “identify sources for a combat rifle system” and determine the potential cost and lead time to deliver up to 10,000 weapon systems, according to the document.

“The rifle must be a Commercial Off The Shelf (COTS) system readily available for purchase today. Modified or customized systems are not being considered,” according to the document, which specifies that the caliber must be 7.62x51mm.

Milley told Senate Armed Services Committee members May 25 that Army officials at the Maneuver Center of Excellence at Fort Benning in Georgia, have developed a new 7.62mm round capable of penetrating enemy body armor plates similar to U.S. military-issue rifle plates such as the Enhanced Small Arms Protective Insert, or ESAPI.

Milley told lawmakers the Army might not require a new rifle since weapons can be chambered for various calibers. The M4, however, would require a new barrel, bolt carrier group, and buffer system in addition to a new lower receiver to shoot 7.62mm ammo, experts maintain.

Milley also told lawmakers that not every soldier will need a 7.62mm rifle — that they could be issued to those infantry units most likely to deploy on contingency operations and engage in close combat.

The Army would want an Interim Combat Service Rifle to have either 16-inch or 20-inch barrels, a collapsible buttstock, an extended forward rail, and a detachable magazine of at least 20 rounds, the RFI states. The rifle should weigh less than 12 pounds unloaded and without an optic.

Interested companies have until 3 p.m. June 6 to submit their responses to the RFI.

“The information provided may be used by the Army in developing its Acquisition Strategy, Performance Work Statement and Performance Specification,” according the document. “This Request For Information (RFI) is for planning purposes only and should not be construed as a Request for Proposal or as an obligation on the part of the Government to acquire any services or hardware.”

In June 2013, the Army ended a five-year effort to replace the M4 with an Improved Carbine. Instead, the service decided to replace the standard M4 with the M4A1, as a result of its M4 Product Improvement Program.

The M4A1 is the special operations version of the weapon that's been in use for more than a decade. It features a heavier barrel and a full-auto trigger. The Army's decision to dump the current three-round burst trigger will give shooters a more consistent trigger pull and lead to better accuracy, weapons officials maintain.