The U.S. Army has a crucial new weapon in its arsenal in the fight against ISIS, and it works without … Continued 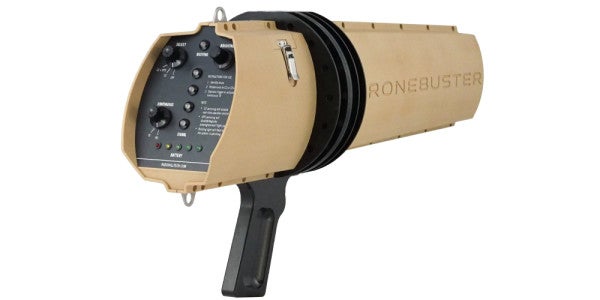 The U.S. Army has a crucial new weapon in its arsenal in the fight against ISIS, and it works without firing a shot.

Resembling the radar speed guns that are standard issue for local law enforcement, the hand-held gadget is engineered to detect and disrupt both consumer and modified drone radio systems, operating on ISM, UHF HAM and GPS bands, to knock even the most sophisticated UAVs out of the sky.

Weighing just 5 pounds and powered by an lithium ion battery, the updated Dronebuster model is outfitted with an enhanced antenna cluster and amplification network designed to operate over longer ranges than previous versions of the technology.

“There has been a lot of work in getting the system certified for deployment, but we are thrilled to partner with the Army to get this easy-to-use capability in the hands of our warfighters,” Radio Hill CTO Bryan Sydnor said in a statement.

The addition of the Dronebuster to troop gear can’t come soon enough. The Army was developing a unified anti-drone strategy late last year, and in March 2017 the Pentagon was reportedly exploring new options for countering the increasing used of remote-controlled aircraft by ISIS fighters, concerned over the prospect of “autonomous suicide bombers” targeting U.S. troops downrange. From the Washington Post:

The effort to stop the aircraft is known as the Mobile Force Protection Program and is overseen by the Defense Advanced Research Projects Agency … Early stages of the research were launched in October with a solicitation to industry, and final proposals for the first phase are due in January, according to DARPA documents. The program is focused specifically on going beyond using electronic jamming to stop unmanned planes and helicopters of to 200 pounds.

While DARPA researches heavy-duty anti-drone systems, the Dronebuster (which Radio Hill Technologies first unveiled last year) may serve as an effective stopgap for U.S. troops in Iraq and Syria facing an increasingly cunning (and desperate) enemy. Sure, the Dronebuster isn’t as cool as the SkyNet anti-drone shotgun shells the Air Force is currently testing, but when it comes to death from above, it’s better than nothing.