Since George Lucas’ “Return of the Jedi” premiered in 1983, people around the world have wondered how long it would … Continued 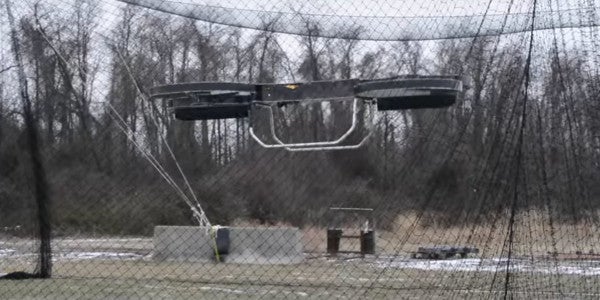 Since George Lucas’ “Return of the Jedi” premiered in 1983, people around the world have wondered how long it would be until we were all riding around on badass hoverbikes, and it appears we are now closer than ever.

On Jan. 10, the Army Research Lab tested its version of the hoverbike at Aberdeen Proving Ground in Maryland. Called “Joint Tactical Aerial Resupply Vehicle,” the hoverbike is an unmanned quadcopter that the Army plans to use to deliver supplies. Right now, it has a payload capacity of about 300 pounds.

“Anywhere on the battlefield, soldiers can potentially get resupplied in less than 30 minutes,” Tim Vong, associate chief of the Army Research Lab’s Protection Division, said in a press release. “We're looking to end up with a modular, stable platform that can be used for even more dynamic and challenging missions.”

And although it won’t be ridden by U.S. soldiers, the Army’s partner company, U.K.-based Molloy Aeronautics, is working separately on a hoverbike that will carry people as well.