After nearly two decades of trying to treat traumatic brain injury, the Army is taking a hard look at adding... 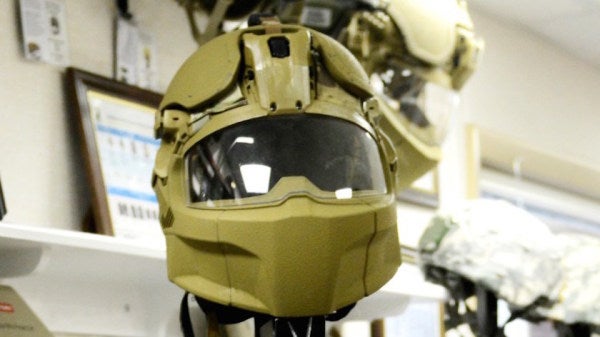 After nearly two decades of trying to treat traumatic brain injury, the Army is taking a hard look at adding preventative measures in protective headgear for its soldiers.

The solution it came up with? Ballistic headgear reminiscent of a motorcycle helmet.

Beginning in January 2017, the new lightweight ballistic helmet — the Integrated Head Protection System — entered the production phase, and in 2020, it is expected to make its battlefield debut.

The base helmet will be similar to the polyethylene Enhanced Combat Helmet that some soldiers are already wearing, reported Military.com. And once field-tested, the service plans to issue this helmet to all troops who deploy.

The base helmet will feature a series of add-ons such as a jaw protector, visor, and “ballistic applique” that serves as a protective layer, and attaches over the base for additional protection.

The downside? The visor is expected to provide ballistic protection, but it won’t provide protection against the sun. Soldiers will need to wear darkened sunglasses to reduce glares when deployed to bright domains.

In 2013, Gentex Corporation was awarded a contract of $1.3 million for Phase 1 development testing of the helmet. It is the first of six pieces the Army is fielding as part of its Soldier Protective System — a revolutionary armor system that PEO Soldier is working to field.